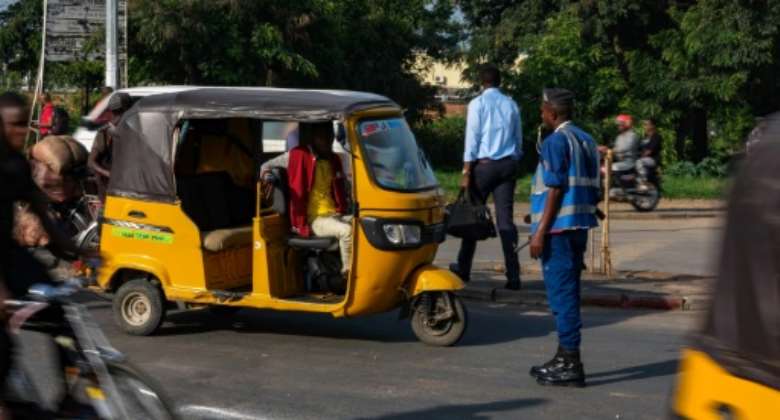 The Burundi government has accused two and three-wheel transport drivers of being responsible for the majority of road accidents. By Tchandrou NITANGA (AFP/File)

The Ministry of Interior announced late Sunday that the "new perimeter prohibiting access to tricycles, motorcycles and bicycle cabs in the centre of the city of Bujumbura is well and truly in force from Monday, March 21".

Police were posted on roads leading into Bujumbura to enforce the ban, which confines two- and three-wheel transport providers to the very margins of the city.

Earlier the roughly 20,000 operators were permitted in all quarters of the city of 1.2 million except for the very centre.

Last month, Interior Minister Gervais Ndirakobuca accused these drivers of being responsible for the majority of road accidents last year.

The ban was supposed to take effect on March 11 but was postponed to give drivers more time to prepare.

Two-wheel vehicles for private use were also banned from the same areas of the city.

More than 600,000 people are estimated to use two- and three-wheelers every day in Bujumbura, where affordable travel options are scarce.

Drivers are mostly young men from rural areas with little other employment prospects, and the ban is expected to hit hard.

"These types of transport are used by a lot of people every day, but the bicycles also supply the city with milk, vegetables and coal, and the rickshaws deliver products to markets and stalls," said one economist who requested anonymity.

The decision would "have catastrophic consequences because it puts tens of thousands of drivers" out of work, the economist added.

Burundi is the poorest country in the world as measured by GDP per capita, at less than $240 in 2020, according to the World Bank.