'How can a presiding Deputy Speaker voice-vote and impartially determine if the ayes or nays had it?' 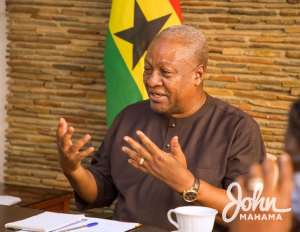 Former President John Dramani Mahama has said the recent ruling by the Supreme Court that presiding Deputy Speakers can vote on a matter on the floor of Parliament has absurd implications among which is the scenario of a presiding Deputy Speaker voice-voting on a matter on the floor of the house and still being the referee that determines which side of the House got the loudest ayes or nays.

In a unanimous decision on Wednesday, 9 March 2022, the apex court of seven Justices presided over by Jones Dotse held that upon a true and proper interpretation of Article 103 and 104 of the 1992 Constitution, a Deputy Speaker, who is a Member of Parliament, does not lose his right to take part in decision-making in parliament.

The decision comes after a lawyer, who is also a law lecturer, Justice Abdulai, petitioned the court to declare as unconstitutional, First Deputy Speaker Joseph Osei-Owusu’s action of counting himself as one of the MPs on the floor even while presiding over the proceedings of the house in relation to the formation of a quorum for the passage of the 2022 budget which had earlier been rejected and thrown out by the minority side.

Justice Abdulai was of the view that once a deputy speaker, who is an MP presides in the stead of the Speaker, he loses his right to vote.

The Supreme Court’s ruling effectively means either of the two deputy Speakers can vote while presiding over the house.

In what is his third reaction to the Supreme Court ruling, Mr Mahama posted on Facebook on Sunday, 13 March 2022: “The first vote in most cases taken on a motion in Parliament is a voice vote. The Presiding officer, whether the Speaker or any of his/her deputy speakers is supposed to listen to which is the loudest, the ayes or the nays and make a determination”.

“If the deputy speakers are allowed to vote, then they must take part, first, in the voice vote. If you are presiding and can shout aye or nay with your party in the voice vote, how do you impartially determine which was the loudest?” he asked.

“What is the determination of the SC? That Deputy speakers can shout aye or nay with the side they agree or disagree with in the voice vote?” he wondered.

In his view, the Supreme Court “is leading us into the realm of absurdity!”

“This judgment is regrettable, and I look forward to the applicant applying for a review of this ruling”.

Warnock wins Georgia run-off against Walker to win the Senat...
26 minutes ago