Supreme Court's Ruling On Parliament: When Principles of Checks and Balances Becomes "Cheque and Balance Me" 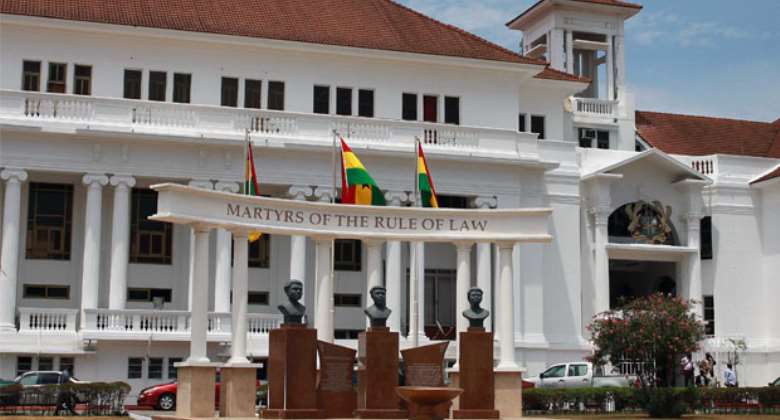 It was Alexander Hamilton who observed in the Federalist papers number 78, that the Judiciary is by far the weakest of the three arms of government. This is because it has neither the "Sword" of the executive, which is commander in chief of the nation's armed forces, nor the "Purse" of the legislature that approves all the tax and spending measures of the country. In short, Hamilton concluded that the Judiciary has "neither FORCE nor WILL but merely judgment."

Little did the Judiciary know the nation's "wallet" literally belongs to the branch of government it's attacking with its “mere judgements": the Legislature.

Indeed, when money speaks, humanity (truth, justice, morals) stays aside. And the Executive really has the power to influence the mere judgements of the Judiciary.

Is it not interesting that of all seven justices of the Supreme court, nobody had a different opinion? What’s the essence of their different composition then?

It is not a surprise.

With five million bribe scandal hanging around the neck of the Boss of the highest court of the land, the Chief Justice, one should Ghanaians have expected from the apex court of the land? The general body language of the Supreme court under President Akufo Addo has not been impressive. And it is tempting to advocate the consignment of the entire judicial system into the dumpster of animus furandi.

It is said, anonymously, that “when a public official is caught of corruption in China, he's hanged; in Japan, he's killed, in the West, he's imprisoned; but in Africa (Ghana), he stands for next election.”

Who knows, maybe the Chief Justice is prepared to throw his hat into the ring for the 2024 presidential election with five million dollars corruption scandal. The current circumstances of financial malfeasances, sleazes, bribery and corruption that have hit the land's highest court should have been enough for Ghanaians to boycott whatever judgement they might have ruled on.

But the Judiciary still has the effrontery to go beyond what is even expected into the bizarre and absurdity of poking its corrupt nose in the affairs of lawmakers.

The highest court did not only just get it wrong in disregarding the rot levelled against it to spotlighting itself in a dicey situation like this, it violated the timeless political doctrines and principles of Separation of Powers and Checks and Balances, which advocate the keeping out of one branch of government's "mouth" from the internal affairs of the other, and to moderately ensure no branch becomes abusive of their powers, respectively.

In his Federalist Papers Number 51, as one of the founding fathers of the USA, James Madison observes that "if angels were to govern men, neither external nor internal controls on government would be necessary."

He lamented however that, "in framing a government which is to be administered by men over men, the great difficulty lies in first of all enabling the government to control the governed; and then the government's control of itself."

This was how the principles of Checks and Balances as well as the political doctrine of Separation of Powers came about which were mainly midwifed by the emergence of the American Constitution. Up until today, various democracies have adopted those principles in their governance processes.

The second aspect of James Madison's principle (Checks and Balances) in respect to government having to control itself has been the greatest challenge in running any country since the time of James Madison in 1788.

In our local street parlance we say one should not bite the finger that feeds them. And so long as the duties and roles of the three arms of government are intertwined in some way, which allows other organs to be more influential than their peers, there will always be problems.

This administrative relationship and arrangement governed by the principle of Checks and Balances is to ensure all arms of government, presumed to be equal in powers, operate within parameters in respect of the powers allocated to each of them in the carrying out of the governmental affairs of the state by the constitution.

However, when one branch of government plays smart over the other, and usually it's the executive arm that outsmarts the rest, especially the judiciary, this noble principle of government assumes a dimension detrimental to effective governance. Just as it is happening in our country between the legislature on one hand against the Judiciary plus the executive branches on the other.

Obviously, with "tight parliament" where there's no majority or minority between government and opposition, the former now turns to the Judiciary to abuse its powers.

It is in this same line of argument the principle of separation of powers was coined to ensure that what is happening currently doesn't occur in administering the state: interference by other organs of government.

As a result, in an apparent contrast to the principle of Checks and Balances, the doctrine of Separation of Powers (SoP) was propounded as a political dogma to curb incessant interference by each of the branches of government. SoP states that all the three arms of government shall have their political roles and activities kept distinct and separated subject to the delineation by the constitution.

It is why Parliament has its Standing Orders to go by its affairs in the Chamber; the executive with its "executive orders" and the judiciary's judicial conduct or ethics. All this rules are subject to the approval of the supreme law of the land.

The 1992 Constitution of Ghana has authorized the House of Parliament to enact their own rules for their operation in Article 110. Whether some of these rules may be consistent or otherwise with the main constitution that might deserve interpretation by the Judiciary without amounting to violation of principle of Separation of Powers is another matter. And in any case, does the judiciary allow to poke its interpretational nose into what is legitimate for parliament granted it by the Constitution if parliament is supposed to be autonomous?

I do not blame the justices who ruled out this jungle justice in their rather interpretational storm. With the president as their greatest beneficiaries who has appointed virtually all current Supreme court judges that overhauled our justice system, Ghanaians could not have expected anything more than this "yes sir" ruling from an already corrupt bench!

Thus, the Judiciary is hiding behind the principle of Checks and Balances to rather pursue "Cheque and Balance us" from the executive arm of government.

The judgement was jaundiced by “stomach interpretation”.

But you see, a "banana republic" by extension is not only when laws of the land are suspended due to military intervention in governance processes or the advent of dictatorial tendency, a state equally can be rendered a "banana republic" and even becomes a "plantain republic", if there's a constant circumvention of the law by its interpreters. Overthrowing of the constitution does not only limited to the barrel of a gun, miscarriage of justice and misapplication of the law like this could resort to what some observers call judicial coup d'etat of parliament, and perhaps the state at large.

It is therefore hypocritical on the part of the president to hate military intervention in the country but at the same time he himself is suggesting that the Judiciary can "overthrow" the House of Parliament by trying to interpret their standing orders the Constitution grants them the liberty to operate with.

Yes, no law shall be above the constitution. But the constitution greenlights parliament to enact rules of procedure in the Chamber. And do not contradict Articles 96, 102, 104, that grants MPs the right to vote. To every law there's an exception. Yes, the constitution grants members of parliament the right to vote in representing their people but once you accept to steer the affairs of the House as the Speaker, you must know what to tell your constituents if you didn't get to participate in voting as the "Referee" of the day.

Moreover, it is worthy of note that accepting to assist with the Speakership is additional duty to the House, the constituents and the state at large. Anybody occupying that seat must operate according to its principle of neutrality.

The descriptions of both the former President John Dramani Mahama and the Speaker, Rt. Hon. Alban Bagbin of the comments made by the President on the matter as absurd and myopic and unfortunate, respectively, were the least they could say.

I am particularly happy that many Ghanaians are thinking now. And there has been “NPP apostasy” by members in the Ashanti Region currently. People are abandoning the party.

Ghana shall never be anybody’s personal fiefdom no matter the number of Supreme court judges you appoint as president.