Did Everyone Who Is Killed During Police Raids Or Confrontations Die Out Of Justice Or Self-Defence? 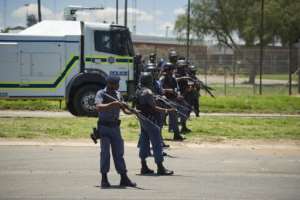 In this era of modernization, innovation and technology, the Ghana Police Service continues to resort to verbal and written reports without backing evidence. It's very worrying because at least the service is old enough to emulate best practices from other jurisdictions to help promote best practices.

Have you wondered how many armed robbers have died in the hands of the police and were reported as confrontations amidst self-defence? Which laws permit the police to shoot and kill and report the same by written reports? Does this mean that the police is bereft of any sophisticated idea in apprehending robbers without shooting and killing? Have we wondered about the rights of these robbers? Don't they also have the right to a fair trial at the law court? It's worrying how the police use a convention that's inconsistent with modern practices (human rights) and we seem to be indifferent about it.

We are not asking the police to allow robbers to roam free or not to do anything when robbers open fire on them. We are only concerned about how police could report their encounter of 'shoot and kill' with evidence at least to prove their cause for action. In that way, we can accept that their actions were necessitated by self-defence in the ambit of the law.

My opinion on the police's action comes at a time we are reading one of the strangest reports released by the service. It sounds disjointed and fundamentally inconsistent with the correct practices. The rampant bullion van robberies had been traced to some personnel in the police service. Before this, police intelligence led to the arrest of two officers and this was widely reported by the media. It did not take long and strangely the police returned with another report saying a confrontation with other suspects had led to the death of the two officers who were arrested earlier and in custody.

Though the police had tried to justify the incident, common sense is exposing their gesture. Many people are not satisfied with their explanations. That's how can the police allow two suspected officers to lead them into a confrontation. Were the two suspected officers armed, handcuffed or following behind the arrest team? Did the other suspects purposely target the two arrested officers to keep them mute of further information? Or did someone intentionally shoot them to conceal a bombshell in the service? How did the whole drama unfold?

In some jurisdictions, the police have cams on their dresses, helmet, guns or the vehicles they use to enable every single action to be recorded for evidence to scrutinize any issue that may bother human rights. All these numerous killings were only reported by the police without a single piece of evidence? How did we know they did not infringe on the rights of others or take the laws into their own hands due to incompetence or bad practices? How did we know that they did the right thing supported by the law? In the US, George Foryd died when a policeman clamped on him. If not for the body cams, no one would have known what actually killed him. He eventually got justice for someone’s misjudgement and the flaunting of the law. Did everyone who was killed during police raids or confrontations die out of justice or self-defence? The rights of these persons who have died in the hands of the police is a huge human rights issue that needs further and better interrogations.

IGP has a whole lot on his shoulders to investigate these matters to the fullest even as he ensures that best practices are embraced by officers to promote human rights. I do not think the police is a public enemy but of late their actions and activities are pointing to the fact that the police don’t longer protect people but are rather the public enemy number one. This trend Mr IGP must reverse as quickly as possible.