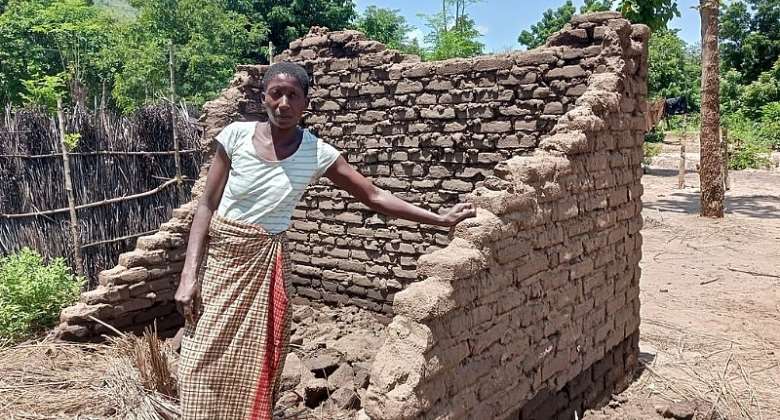 Mother of six Mwandida Matias, 39, recalls the night they were hit by violent storms in Chikawa district, southern Malawi. People were shouting, others beating drums to alert people. By the time she managed to get out of the house with her children, the water was already up to her waist.

“The water came around 12 midnight. All we managed to do was run for our lives,” says Matias.

“All our belongings, including clothes, beddings, goats, chickens and kitchen utensils were all washed away. It was very terrifying,” Matias tells Africa Calling podcast, pointing at the debris of what used to be her home.

It's been over a month since Tropical Cyclone Ana made a landfall in Malawi after sweeping from Madagascar through Mozambique and causing massive damages along the way. Thousands of people affected by the windy, heavy downpour are still stuck in hundreds of makeshift camps unable to move on after the rains swept away their possessions.

No home left
Like hundreds of others who were in the same situation, Matias managed to reach the nearest primary school where they camped for the night. Meant to be a temporary shelter until the water subsided, it has sadly become a medium-term solution.

After returning home few days later to check on their property, those who had run for shelter found that most of their homes, if not all, had been washed away.

Across the country, power outages for days following the damage to the hydro-electrical generating equipment.

Matias is not new to the floods. When it rains, Chikawa and neighbouring Nsanje district in the southernmost end of the country bear the brunt of it all. It was here where another cyclone, Idai, caused massive damage back in 2019.

Shire river, the largest in the country and the only outlet of Lake Malawi, passes through the districts and connect with other rivers before they empty into Zambezi river in the Mozambique.

Standing at where her home used to be Matias says the effects of this year's cyclone were different, describing them as “fast, heavier and more dangerous.” She also points at an abandoned house nearby which is submerged in sand up to the window level. Everyone was affected here, she says.

Overall, the storm Ana affected more than 216,900 people and killed at least 10, with hundreds of families displaced by heavy rains and flooding. But for those still living in makeshift camps, wounds and memories are still afresh and the quality of life is unimaginable.

At the camp which houses about 800 people, including young children, Matias and dozens of other women are cooking thick porridge using pots and firewood in a room that used to be classroom. When the night falls, they will sleep in the classrooms.

Life is not only uncomfortable, but everyone is lacking basic essential items, says Paul Malonga, a 35-year-old father of three. Like others, his house was also swept away, along with his crops.

“We didn't manage to rescue our properties, just our children. We went to a neighbours house, but moment later I heard the sound of the house failing. In the morning when we went there, there was nothing to save,” he says.

He and his family are now living in the school where his children study.

“My goats, chicken clothes and everything in the house were destroyed. These clothes that we're wearing were given to us by some well-wishers.  Staying at a group like this is difficult more especially with your children,” he adds.

Health officials are concerned about the hygiene quality at the camp, especially for children, says Felix Makhaza Mkali, a local health surveillance assistant (HSA), or grassroot health care providers in Malawi employed by the government.

“Clinically we don't have hand washing facilities that can be used to prevent some of the diseases at this camp because since it was opened; no bucket has been provided here,” says Mkali, who says they can't wash their hands after going to the bathroom.

The other challenge is that those using the school as a shelter are sharing the facilities with the schoolchildren, who still go to school.

“There's congestion because during school days, we see children there and parents going there so that is not good,” he says.

“These children are supposed to be taken care of because they are prone to the diseases, something which is not happening,” he adds.

At Nyangu Primary School alone, a total number of 868 people from 268 families are camping at the school. Out of this figure, 567 are female, and 301 are male.

Healthcare is lacking
ButNyangu is not the only place where people the survivors of Ana are camping after their houses were damaged beyond repair. Other camps are found in Nsanje, Mulanje and Phalombe districts. Here on the outskirts of Chikwawa, there are four camps within a stretch of just 20 kilometres, but a total of 94 camps overall, says Dr Victor Mithi the president of the Association of Society of Medical Doctors in Malawi.

The medical needs of the people are overwhelming with new infections within the camps including diarrhea, skin and eye infections, malaria and other types of infections.

Those who need regular medication, such as to treat hypertension and diabetes, are also struggling, says Mithi.

“We've also seen some people who have been discontinued from the routine care. Like people living with HIV, with the disaster they could not manage to get the medication because the drugs were washed away,” he says.

Even eating once a day can be impossible.
“We've seen issues of acute malnutrition because people have lost almost everything they had and they have no food,” he says.

The doctors say they need more help to meet the health needs of the people in the camps, especially since Malawi's health system was struggling to procure medications to begin with.

“There is a lot that has be to done. We need a lot of support and this support can be in terms of drugs, food, shelter to these people. Otherwise, medically we're doing the best we can although we need more hands and support,” adds Mithi.

Some Malawian forward thinkers
Children play football in the camp, while their parents say they have no idea how they will bounce back from the disaster with their life possessions washed away. In the meantime, some are doing piecework and small jobs to provide for some of the needs for their families.

A few leaders in the area are already coming up with forward thinking actions. One chief, Village Headman Samson has sold his cattle and goods to buy safe land to relocate his people to higher ground to avoid future disasters.

He has 65 subordinates who lost everything during the cyclone. It is these people who need to be supported further, according to Mithi.

This story was first heard on RFI's Africa Calling podcast.