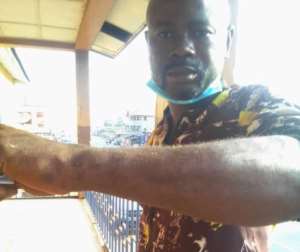 Abuja, March 11, 2022 — Sierra Leone authorities should swiftly identify and hold to account those responsible for the recent attack on journalist Alusine Antha, the Committee to Protect Journalist said Friday.

On February 17, in the western city of Waterloo, a group of about 30 people attacked Antha while he covered a meeting over a land dispute, according to the journalist, who spoke to CPJ in a phone interview, and a statement by the Media Reform Coordinating Group, a local press association.

Antha, a presenter and producer with the privately owned broadcaster Eagle Africa FM, planned to cover a meeting over a dispute between members of the local Matale community and former Assistant Inspector-General of Police Christopher John, he said. However, when he arrived, he found a large number of young people insulting police officers at the scene and, when officers asked them to step back, those demonstrators threw stones at the officers and destroyed John’s car, Antha said.

The police officers and John fled the area, and when Antha attempted to leave on his motorcycle, a group of people accused him of being part of John’s team, threw stones at him, hit him with sticks, and stole his motorbike, two phones, and a recorder, the journalist said. He told CPJ he was attacked for about 30 minutes in total.

“Authorities in Sierra Leone must ensure a swift and thorough investigation into the attack on journalist Alusine Antha and hold those responsible to account,” said Angela Quintal, CPJ’s Africa program coordinator, in New York. “Journalists should feel safe to cover the news, and ensuring justice for attacks against the press is important for preventing their repetition.”

Antha has covered that land dispute on his weekly radio show since last year, he told CPJ.

He said he sustained swelling on his head and scratches on various parts of his body, and was treated for injuries to his hand and back. Antha said that Matale community members returned his motorbike eight days after the attack, but still had not returned his phones or recorder.

Police filed assault charges against seven people for attacking Antha, the journalist told CPJ. He said none of the suspects attended a court hearing on February 21, and another had been scheduled for March 14.

Speaker Bagbin calls on Israeli counterpart in Jerusalem
47 minutes ago