'Loose talker' Mahama has small elementary understanding of the law; his comments on SC ruling can be forgiven – Gabby 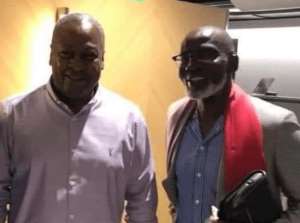 A senior member of the governing New Patriotic Party (NPP), Gabby Asare Otchere-Darko says John Dramani Mahama has small elementary understanding of the law for which reason he can be forgiven for his comments on the Supreme Court ruling of the voting rights of a Deputy Speaker.

In a unanimous decision on Wednesday, March 9, 2022, a seven-member panel of the Supreme Court held that upon a true and proper interpretation of Article 103 and 104 of the 1992 Constitution, a Deputy Speaker who happens to be a Member of Parliament does not lose his right to take part in decision making in Parliament when sitting in for the Speaker of the House.

The apex court ruling has been met with dissatisfaction from opposition members including former President John Dramani Mahama as well as Speaker of Parliament Rt. Hon. Alban Bagbin.

According to ex-President Mahama, the ruling is shocking and has set a dangerous precedent of judicial interference in parliamentary procedure.

On his part, Speaker Bagbin said, “The SC decision, is to say the least, not only an absurdity but a reckless incursion into the remit of Parliament.

Reacting to the two comments in a post on his Twitter page today, Gabby Otchere-Darko says although Mahama can be forgiven for his comments on the Supreme Court ruling, the same cannot be said about Speaker Bagbin who is a lawyer.

Gabby Otchere-Darko’s post reads, “You may choose to forgive John Mahama because his elementary understanding of the law is evidently small, going by his reactions to Supreme Court decisions - except ex-presidents are expected not to speak loosely against the 3 arms of Govt. But, what about lawyer Alban Bagbin?”