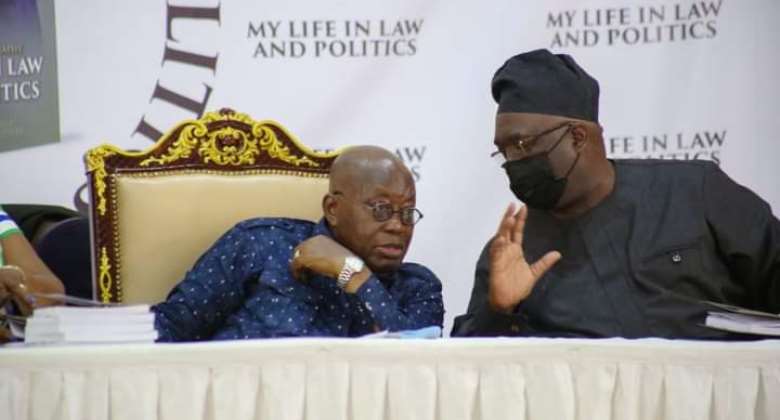 The book, launched on March 2, 2022, at the Ghana Academy of Arts and Sciences in Accra, captures the memoirs and biography of Bernard Joao da Rocha.

The 259-page book, titled: "My Life in Law and Politics," was authored by B. J. Da Rocha with his daughter Ayodele Kingsley-Nyinah, who is also a lawyer.

The book is divided into two parts , containing 14 chapters in all.

The first part of the book is on the biography of da Rocha who was the first National Chairman of the ruling New Patriotic Party.

The second part of the book deals with post-independence politics in Ghana, the creation of new political parties and regimes, the military rule in Ghana, da Rocha's political and legal career.

In his review, Hon. Ghartey pointed out that the book gives insight into the relationship between lawyers and clients as well as the early days of the Ghana Bar Association and the relationship lawyers should have with judges.

He said the book on the life of Da Rocha was of significance to students of law and recommended that the book should be a text book for advocacy and ethics at the law school.

Hon. Ghartey, a former Attorney-General, who was da Rocha's student, further noted that the book contained several cases the late da Rocha conducted as a lawyer, describing the book as a valuable resource for law and politics in Ghana.

According to him, commitment to the rule of law, democracy, justice, honesty and hard work, were traits of da Rocha's life.

Hon. Ghartey in his review recognised that da Rocha was one of the great advocates of his time. Joe Ghartey said listening to da Rocha arguing in court was like listening to an orchestra playing music. He said it started slowly and the tempo picked up and picked up, reached a crescendo, with the final submission. Joe Ghartey noted that when he started practicing law in 1988, there were other great advocates like the Rt Hon Peter Ala Adjetey, Joe Reindorf and Nana Akufo-Addo, the current President. He said in court was like a powerful heavy weight boxer. He took no prisoners. court.

According to Hon. Ghartey who served as Minister of Railways during the first term of Mr Akufo-Addo's presidency, the President "floated like a butterfly and sting like a bee" during his days in court as a lawyer.

President Akufo-Addo who officially launched the book, described the book as a "great book" that would contribute to democracy, politics and the practice of law in Ghana.

Mr da Rocha served as the General Secretary of the Progress Party (PP) in 1969 and also General Secretary of its successor, the Popular Front Party (PFP). He was also the first Chairman of the New Patriotic Party (NPP). Da Rocha was a good man who bore no grudges, President Akufo-Addo, concluded.

Latest Photo Reports
Catch up with all the political quotes from our politicians.
Advertise here
More from Book Review
ModernGhana Links
Eze and His Inspired Book on Amaechi: Dakuku Peterside Throws More Light on the Masterpiece
Unraveled By Dr Emma Osong: A Commanding And Cognisable Voice In Time Of Dire Need
Thoughts Of A Nima Boy: A Conversation With A Bookstore Keeper And ‘Ace Of Spades’ Book Review
TOP STORIES

Arise Ghana demo: They're political elements not professiona...
58 minutes ago