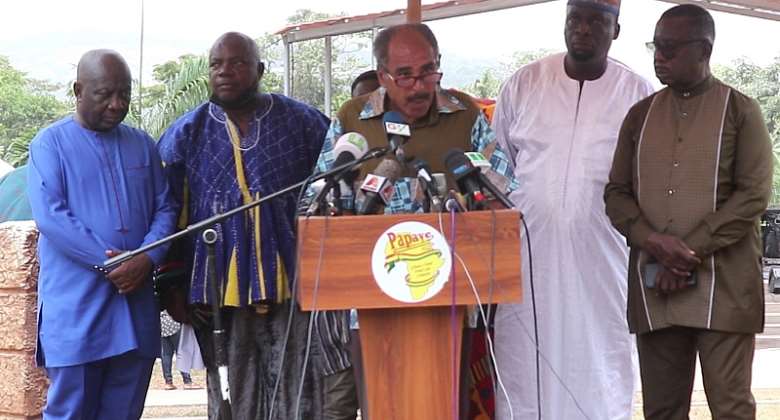 He said during the launch of its newly established recreational village as part of its 30years anniversary celebration at Aburi Konkonuru in the Eastern Region.

In his address, he noted that tourism can be boosted through good road network.

He indicated that government must prioritize roads leading to tourist sites in the country.

According to him, the various facilities at the Recreational village provide tourists with facilities for complete relaxation with their families, while enjoying facilities which include- Virgin Forest Reserves, an Event Centre, zoo, children's Amusement park, sports complex Swimming Pool, Farm (Green House), Restaurant, Conference Venue among others.

He added that the village comes as a modern recreational village to boost tourism in the region, however the road leading to the venue is in a very deplorable state.

“Notwithstanding our achievements so far, I must say that I had to construct the road from the Papaye Village to Konkonuru to make it more motorable. I would therefore wish to humbly appeal to the Minister for Tourism, to help with the asphalting of the road that leads from Gyankama to Konkonuru. You must have seen the deplorable state of the road. It is worse during the rainy season. Tourism can be boosted through good road network,” Mr Kalmoni stated.

He added that the company will do its best to utilize the recreational village to contribute to the development of the tourism sector of the country.

He appeals to government through the tourism ministry and its agencies to market the village for the desired revenue generation.

“We will do our part to keep this place as an Eco-Friendly hospitality destination but I will again appeal to the Government especially the Eastern Regional Minister and the Regional Tourism Director to help market the Papaye Tourism village, as this place when patronized will bring in revenue for the region and the country as a whole,” Mr Kalmoni stressed.

According to him, the village currently can accommodate musical concerts, weddings, birthdays, picnics, conventions, retreats, camping, receptions, sporting activities, keep fit among others.

He said the village is being developed in phases and can accommodate more of such events when all the phases are completed with the compliment of accommodation which is also in the pipeline.

The Papaye Recreational Village at Konkonuru started about 23years ago with few workers but now have a total workforce of 61.

Papaya which is 30years this year started at Osu to seven operational branches at Spintex, Osu, Haatso, Lapaz, Awudome, Tema and Tesano employing over 600 staff. Weija and Fafraha branches are next in line.