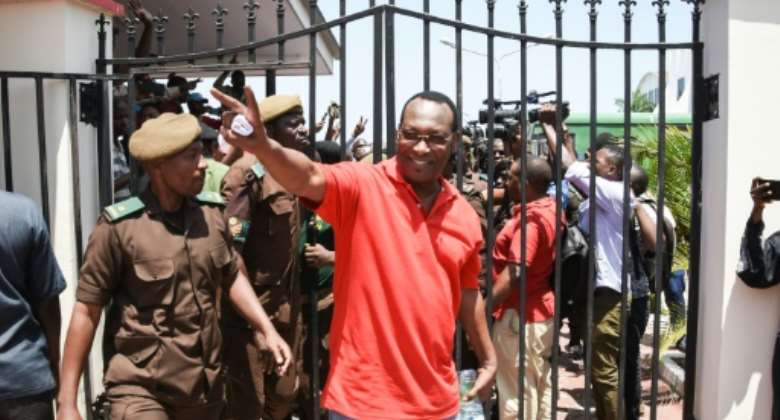 Mbowe's supporters have dismissed the charges as politically motivated and aimed at crushing dissent. By ERICKY BONIPHACE (AFP/File)

The release of Tanzanian opposition leader Freeman Mbowe last week raised hopes of an easing of political freedoms in the East African nation, but observers say much more is needed to turn the page on years of authoritarian rule.

The surprise move on Friday by prosecutors to drop terrorism charges against Mbowe, who had spent seven months in prison, was followed by a meeting hours later between him and President Samia Suluhu Hassan, with the pair promising to defend democracy.

The meeting revived the optimism that had accompanied Hassan's appointment last March after the death of her autocratic predecessor John Magufuli, with the then new president reaching out to the opposition and reopening banned media outlets.

But her presidency fell under a shadow when Mbowe was arrested in July, along with other officials belonging to his Chadema party, just hours before they were due to hold a public forum urging constitutional reforms.

On Friday, Chadema secretary general John Mnyika said he hoped Mbowe's release would "open a new chapter of truth and justice in our nation."

"I will be even more relieved when Tanzania gets a new constitution, an independent electoral body and to see people's rights respected as important aspects of democracy and development," Mnyika said on Twitter.

Opposition parties have been pushing hard for political reforms ahead of the 2025 presidential elections, calling for a level playing field.

"Observing the rule of law and possibly (making) some constitutional reforms will help to improve the political space going forward," said Richard Mbunda, a political science lecturer at the University of Dar es Salaam.

"The shift will mostly depend on the political will, especially by the president, to address the main issues around democracy and rule of law which have been raised by the opposition," Mbunda told AFP.

Hassan had increasingly come under pressure to dismiss the case against Mbowe, which had raised rights concerns at home and abroad, with his supporters dismissing the charges as politically motivated and aimed at crushing dissent.

Mbowe's release was followed by a meeting hours later between him and President Samia Suluhu Hassan. By STR (TANZANIAN STATE HOUSE/AFP/File)

But Amnesty International warned late Monday that Hassan's government needed to do much more to reverse Tanzania's slide into autocracy and must "stop weaponising the law to target opposition and critical voices."

Since Hassan took power following the sudden death of Magufuli, who was nicknamed "Bulldozer" for his uncompromising leadership style, she has sought to break with some of his policies.

She has also made conciliatory overtures to the opposition, meeting Chadema's deputy chairman Tundu Lissu in Brussels last month. Lissu was the party's candidate in the 2020 presidential election but lives in exile in Belgium following an attempt on his life in 2017.

On Tuesday, Mbowe told his supporters the truce with Hassan could pave the way for a brighter future.

"I believe this will take us somewhere and solve many political issues," he said in a speech.

Other opposition politicians have also sounded a note of hope, with Zitto Kabwe, leader of the Alliance for Change and Transparency (ACT Wazalendo), calling the meeting between Mbowe and Hassan "a very positive move".

"It's not just a one-off event," he told AFP, adding: "It already ushers in (a) new dispensation in our politics."

"I am very upbeat about the political situation in the country and I am sure that the 2025 elections will be conducted a little bit fairer than before."