This Is Not The NPP We Fought For. 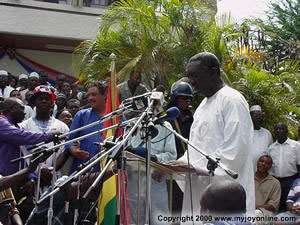 As it is written in our holy book, the Bible "If you get everything in this world and lose your live, man, what do you gain." This has been very true , when one looks at the lifestyles of the NPP functionaries in government. Those of you who knew some of these disgruntled leaders before the 2000 elections and today will surely bear me up that, NPP under Mr. Kufuor has betrayed the trust we reposed in them. Ghanaians should not blame anyone but our President. He appointed people like Obetsebi-Lamptey, Bamba, Osafo Marfo, Apraku, Kasanga, Ameley Tagoe, Boafo and a host of others who were just there for their pockets. These self-seeking, opinionated and selfish individuals never cared about the detoriating service conditions of our medical doctors, nurses and especially teachers. The answer has been the brain drain in these sectors, yet they still want to rule, come December. This can only happen in Ghana. If, the president is sincere, he could have bowed out with his tribal cabinet. Today, after the hectic campaign in 2000,and the HIPC conditions we find ourselves, thanks to the incompetent NPP Finance Management Team, the President has traveled over 80 times since he took office his people go overseas for medical check-up, whist our children attend school under trees. Wereko-Brobbey came into the scene and he nearly collapsed Volta River Authority and it took Kufuor months to ask him to step-aside. I sometime do not understand them, when they go from institution to institution, asking the students to study hard. You have Obetsebi-Lamptey and Bamba in government and still ask our children to study hard. I believe there is something wrong with our president. He has no shame. Other way round, he underrates the intelligence of Ghanaians. This is very true. Because, till today, they have made some Ghanaians to believe that NDC has been the cause of their woes; which I think, is a ranting of a government without a vision and innovative ideas. Others are laughing at us outside. NDC failed and that is why we have NPP today in government, but the arrogance of the president and his team, leaves much to be desired. Rawlings and his NDC are ´Abonsam` whilst the murder of Ya-Naa has received little attention. It was one of my teachers, Mr. Offei-Darko of blessed memory, who reacted to the death of Agyei-Barimah, of Legon (Commonwealth Hall) by the Acheampong police in December 1976 that, his death shouldn't be only the worry of Brongs but a whole country. That, one day it may not be a student from Brong Ahafo, but Akropong-Akwapim, his native town. He was not understood, but today in our world in Ghana, he comes into mind, in the case of Dagbon and I salute him, for this wise saying. Weep with Dagbon and ask for justice for Dagbon, for it may be your self or your relative one day under Kufuor. If their propaganda machine is working hard, re-double your efforts for victory will be yours. Kwaku Baako, Okyere-Darko, Gina Blay, Dungan, Ansaba and of course Haruna Esseku and Asamoah Boateng know what they are protecting. Prof. Mills will never use them in anything in Ghana. These ones I have mentioned, remind me of friend's statement about some Ghanaian journalists. He said, some behave like DRUNKARDS, because they fail to see the difference between good and bad and it is the same way I see Okyere and his friends. NPP wanted to reconcile us but the composition spoke a lot for itself. Today, even children in Ghana know it was established to destroy NDC. It has failed in its objective and how much money was involved, when our people are dying of hunger. I pity Prof. Kwapong, who has joined these nation wreckers, 47 years after our independence. Vocal ones like Agyare Koi-Larbi, Ossei Aidoo are side-lined; that is the NPP´s understanding of democracy. The ´mumu´ should not be criticized and they are the architects of Ghanaian democracy. Ghanaians, wake up for the fight is yours, but no one else. Ghanaian brothers and sisters, today, if you are hungry and see no perspective for the future, like my friends at the former UTC area, you have only one thing to do, send Kufuor packing to Nkawie, where he belongs. This arrogance will only increase your hardships. Remember the Kumasi Magazine apprentice Mr. Kusi and a host of others who were arrested , because they were exercising their democratic rights, you have one option -vote against NPP, come December. All those who want to see a different Finance, Agriculture, Mines, Education, Trade&Industry, Health, Defence, Interior&Deputy, Information and in fact, the retirement most arrogant illiterate in Ghana's political circles-Obetsebi-Lamptey, then join me to say This is not the NPP we fought for and come December, without their rigging plans, vote them out. Views expressed by the author(s) do not necessarily reflect those of GhanaHomePage.