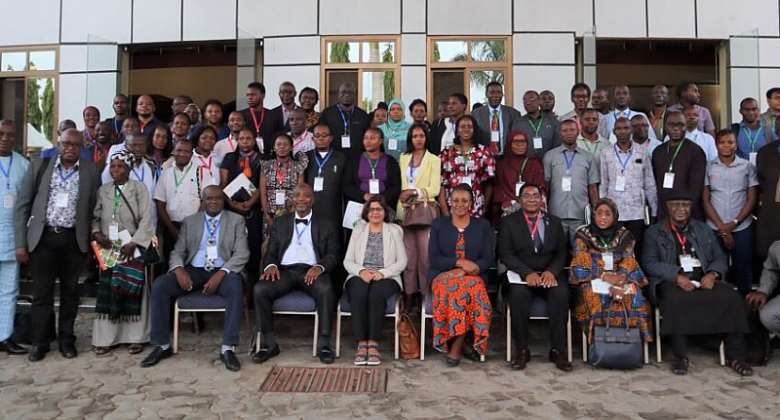 In her opening remark, the IITA Eastern Africa Hub Director, Dr. Leena Tripathi noted that cassava is at the heart of IITA’s work. She lauded the government for putting efforts into developing the crop for commercialization by launching the National Cassava Development Strategy (2020-2030) in 2021 as the crop’s blueprint.

“I am glad that Tanzania and Nigeria are comparing notes on how to develop cassava sector,” she said.

Leena also noted that IITA has multidisciplinary experts who work in various areas, including breeding, disease management, agronomy practices, postharvest management, and digital tools such as Nuru and SeedTracker. She reiterated IITA’s commitment to collaborating and sharing its expertise and technologies for agricultural development.

The representative of the Minister of Agriculture, Engr. Anna Mwangamulo, advised scientists to research based on the market needs so that the solutions could cater for the consumers’ needs. She also urged the cassava stakeholders to implement the cassava strategy in their activities for the development of the whole cassava sector.

“I appreciate the efforts from IITA and TARI in releasing 25 improved cassava varieties,” Anna lauded.

During the meeting, the participants were led through interactive presentations and impactful plenary sessions geared towards tackling the challenges within the cassava seed sector, finding solutions to boosting profitability and efficiency in the cassava seed systems, and making the entire cassava value chain more productive and private-investment friendly.

Dr. Atser noted that Tanzania needed to increase productivity to attract investments, describing the seed system as a big opportunity for farmers to explore.

The Chairperson of Tanzania Cassava Producers and Processors Association (TACAPPA), Mwantumu Mahiza, who also spoke at the event, urged financial institutions to create feasible and youth-friendly loan regulations to increase youth participation in the agriculture sector.

Cassava stakeholders also shared experiences and showcased their activities across the entire cassava value chain. “When I started working on machine designs for cassava processing, many thought that I was wasting my time. But seeing how cassava has become a focal crop and people want to develop the sector, they have started to understand my perspective.” reflected Peter Chisawilo, a Processing machines manufacturer at Intermech.

Mama Antonia, a Cassava Seed Entrepreneur, who was initially sceptical about the profitability of the cassava seed business, noted that the training she received from the Building Economically Sustainable Cassava Seed Systems in Tanzania (BEST) cassava project helped her to create a successful and sustainable cassava seed production business. “Through this business, I have taken my children to school, built a house and have increased food security in my family,” Antonia testified.

He noted that the changing narrative presents an opportunity for growers, especially the private sector, to take advantage of the seed sector.

BASICS-II which is led by IITA aims to provide farmers with access to affordable, quality-assured seed of cassava varieties in demand by local food and processor markets by strengthening a commercially viable seed value chain operating across breeder, basic, and commercial/certified seed levels. This value chain will enable more efficient dissemination and adoption of superior varieties to improve productivity, increase the incomes of cassava growers and seed entrepreneurs, improve gender equity, and contribute to inclusive agricultural transformation in Tanzania and Nigeria.

In Tanzania, BASICS-II builds on BEST, a recently concluded project, which worked with 641 registered Cassava Seed Entrepreneurs (CSEs) from 11 regions. About 1068 hectares under cassava seed production were certified and accessed for seeds by farmers. The project officially released five improved varieties. Four initially released varieties for the Coastal lowland were extended countrywide, and CSEs produced their seed. Tanzanian partners under BASICS-II include MEDA, TARI, and TOSCI.