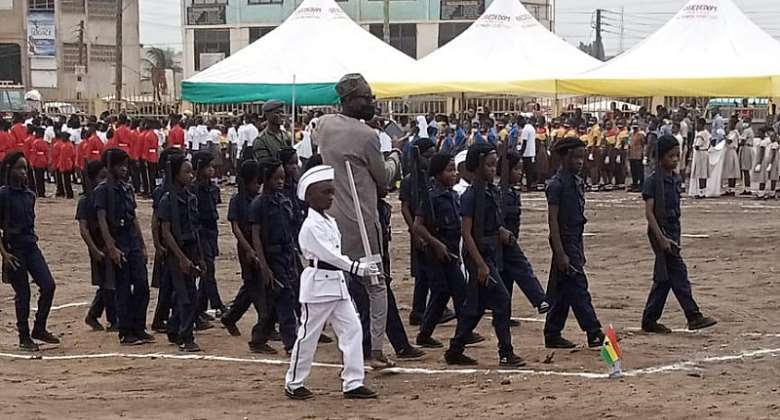 The Member of Parliament (MP) for Ashaiman Hon. Ernest Norgbey has donated 1500 pieces of exercise books and sum of money to the overall best school in the cadet cops category, Bright Brains Aflatuon Academy located at Ashaiman Jericho yesterday during the celebration of this year’s 65th independence day celebration of Ghana held at the Ashaiman Municipality.

Proprietors of the school Mr. Kennedy Owusu and Madam Salomey Nkansah told the reporter they were delighted and much excited for the school being chosen as best in the cadet category.

The Ashaiman District Police Commander also donated a cash sum of money as he was mesmerized by the drills by the youngest cadet cop of the school being first timers participating in the 6th March anniversary.

Several awards were given to the participation schools by the Ashaiman Municipal Chief Executive.

Another toast of side attraction from the same Bright Brains Aflatoun Academy was a certainTorgbui Worlasi Maxwel caught on camera mimicking the declaration of Independence by Osagyefo Dr. Kwame Nkrumah as he watch her sister Elorm Maadey participating in the best cadet cops.

Present were other dignitaries including the chief of Ashaiman Nii Tettey Adjor who grace the occasion.