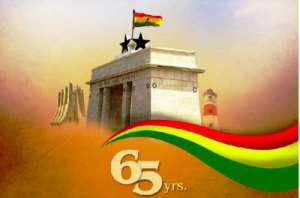 Sixty-five years (65) after independence, Ghana as a sovereign state is almost worst off than under colonisation. Persistent corruption, and financial malfeasance at the Ministries, Departments and Agencies, often reported by the Auditor-General, affirm this judgment. The country is yet to demonstrate it is worthy of the sacrifices of the forefathers. The vision at independence in 1957 is far from the reach of the state. There is much disappointment with the workings of state institutions, in the delivery of greater welfares to the citizens.

Sixty-five years (65) of political freedom with almost thirty (30) years of operating with a new constitution uninterruptedly is a great achievement. But what really are the positive consequences of these for the masses? The alerts of a possible coup d’etat are borne out of the glaring weaknesses of the democracy of the country to produce hope and blessings. Corruption, misappropriation of funds, and discriminatory behaviours of the political elites are causing bitterness in the citizens, which may be grounds for a coup d’etat.

There must be loftier attempts and ground-breaking strategies that ensure fairness in governance. The promise of equal opportunities in the Constitution needs to be executed without recourse to political affiliation, political connections and whom you know conditions. The contemplation of a coup d’etat in the political discourse of the state indicates an inertia in the democratic and political progress of the country.

Why must anyone discount the idea of a coup d’etat when the political elites are stubbornly unyielding to the calls for a review of the Constitution the citizens find problematic. The Constitution is currently viewed as the principal cause of the underdevelopment of the state. There is a limit to forbearance and so, Article 3 clause 4(a) and (b) of the highest legal document is not a shield for a possible coup d’etat in Ghana. The people who intend to have a coup d’etat cannot restraint themselves beyond a certain limit. Overlooking the demands of the citizens in any democratic state is dangerous: it can serve as a recipe for any undesirable coup d’etat.

The spirit of nationalism instilled in the people some decades ago is visibly gone. The spirit of corruption is obstinately gaining impetus to destroy institutions and unsoiled systems in the country. Corruption has engulfed the various Ministries, Departments and Agencies: the malfeasance at these agencies corroborates this inference. What is worrying is that no effective measures are put in place to block the waste of funds and other resources. The financial malfeasance at the Ministries, Departments and Agencies, as reported by the Auditor-General, increases in value year-after-year. After 65 years, perennial mismanagement of funds and resources must cease with practical measures and willingness to implement same.

In Ghana, development planning is equally led by the party in power, making it inefficient. The National Development Planning Commission is ineffective because it is led by the party in power implicitly. Such an important institution of state should be independent. With the failure of manifestos to deal with the acute development challenges of Ghana, the National Development Planning Commission should be independent, devoid of partisanship, to lead the development agenda of the state.

The goals of the Commission in development, designed for the various sectors of the economy, must be the items in the manifestos of the parties. Political parties do not need to stress for goals to be achieved: they just need to pick ideas from a composite national development planning document and adopt them for implementation. Simply, the Commission should have national goals to be achieved, for instance, in education, health, banking and finance, culture and chieftaincy, religion etc, for the political parties to adopt as manifesto items for final execution.

It is practically plausible for this proposed idea to be executed in Ghana. Timelines can be attached to the implementation of each goal. With strict implementation deadlines, the goals of the state can be achieved with better performance outcomes than what is witnessed currently.

It is very easy for the political parties in Ghana to abandon projects of their predecessors with the use of manifestos. An independent National Development Planning Commission needs to firmly ensure all goals of political parties fit into the national development goals of the state as would be contained in its plans. An absolutely independent Commission with powers to enforce laws can reduce the waste and ensure an acceleration of infrastructural development.

Sixty-five years after independence must be a period for pensive thinking, and a reconsideration of the strategies put in place to create welfares and hope for the youth. Ghana should be able to guarantee equal rights, equal opportunities and fairness in all spheres. 65 years of independence with 29 years of a stable democracy is a sign of political maturity that must yield reliable benefits to the citizens.