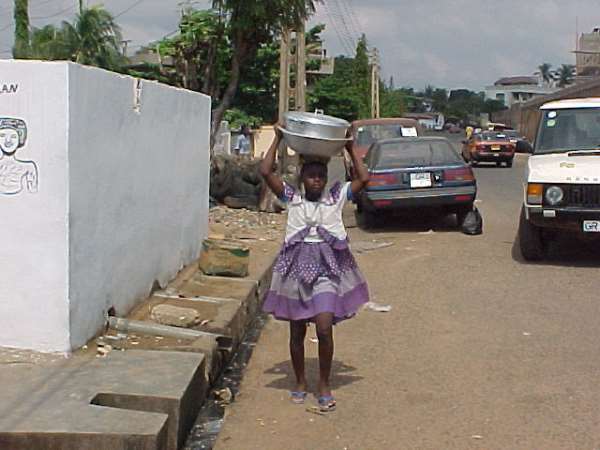 Accra, May 27, GNA - Child trafficking has been termed as the 'Mother' of the worst forms of child labour. It is estimated that 900,000 people are trafficked internationally every year. Child prostitution; slavery practices, particularly in the fishing industry, child domestic servitude; exploitation of children in mines and customary servitude are the other forms of abuse of children.

This was the order of the worse forms of child abuse a day's consultative forum arrived at. The Child Labour Unit of the Labour Department of the Ministry of Manpower and Employment in collaboration with the International Labour Organisation (ILO) and the International Programme on the Elimination of the Worst Forms of Child Labour (IPEC) organised the forum.

The forum which was attended by 26 participants was among other things, to gather inputs from stakeholders in the district, sub-district and community levels as part of preparatory work towards the development of a National Time-Bound Project Document that would manage the implementation of the elimination of all Worst Forms of Child Labour (WFCL) in Ghana.

Other worst forms of child labour were identified as street hawking, drug peddling, herding of livestock, children used by the physically challenged in begging along busy streets and snaking (this is a method whereby armed robbers and thieves engage young children to pass through small inlets into their areas of operation) According to Ms Elizabeth Hagan, Head of the Child Labour Unit, the Time Bound Programme (TBP) would form the basis for strengthening the national capacity for a more effective cohesive and sustainable fight against the menace.

The programme, when adopted, would fulfil Ghana's obligations under the ILO and the IPEC Convention Number 182 of which Ghana is a signatory.

In a brief background, Ms Hagan said a National Child Survey by the Ghana Statistical Service supported by the ILO and IPEC indicated that out of an estimated population of about 6.4 million children between the ages of five and seven, about 2.5 million were engaged in economic activities.

"About 88 per cent of the number are into unpaid family businesses and apprenticeships, while 5.9 per cent are self-employed, "she said. Ms Hagan cited some of the factors that promoted child labour as poverty, exploitation by adults and children's own choice as a result of ignorance among other things.

"Ghana recognizes the enormous socio-economic impact of child labour on the individual child; families; communities and indeed the nation as a whole. The fact that it creates and sustains a vulnerable population that has no employable skills, and who therefore cannot be gainfully employed, many of whom, out of frustration and attempt to survive may become a social menace by engaging in armed robberies, drug use and prostitution.

"These result in the loss of valuable human resources who often become a social menace against whose activities the nation has to spend huge sums of money to combat social insecurities and problems" she stated.

Child labour can be defined as any work that is harmful and detrimental to the full and holistic development of a child.

These include work, which by its nature and intensity is harmful to the welfare of a child; work that removes children from school or interferes with schooling; work that denies children education and work that affects them negatively at the physical, psychological, emotional and moral levels.

It must, however, be noted that not all work is harmful to children, since some are indeed beneficial to their development. For example from young age, children run errands; help around households or assist on farms and in family businesses. As they grow older they take on light jobs or learn valuable traditional trades. This is therefore acceptable as child work under Section 90 (1) of the Children's Act 1998 ACT 560.

On what should be done in Ghana to combat the worse forms of child labour, the participants stressed the need to do some research in order to know the number of children involved in order to help remedy the situation.

Educating the target group-for instance with the 'Trokosi System", the chief priests and the young girls were to be educated to be aware of the benefits of doing away with it. In this regard it was suggested that laws were to be enforced to protect children.

They urged the Government to be more committed to the issue of child labour. It was suggested that there should be the strengthening of vocational and apprenticeship training, and those already in it, given skilled training, the provision of micro credit for women's group to be engaged in profitable ventures, as well as the enforcement of laws in various legal documents so that people would know their rights and responsibilities.

Deprived families could be provided with some financial assistance.

They observed that if people in the community were educated on the evil aspect of the problem they would frown on it. The participants came to a consensus that the general improvement in the country's economy would go a long way to support the upkeep of the home.

They called on the Government to set aside some money for this all-important project.

The issue of the refusal to withdraw children because of traditional beliefs; irresponsible parenting; broken homes and the lack of family planning; negative cultural and traditional practices and the problem of people resisting change; gender roles and responsibility that made change difficult among other things, were enumerated as problems and challenges that should be anticipated.

It was observed that the low-income levels of parents push children to sustain themselves and the family. Another factor was the issue of inadequate funding by donors.

Their roles should include advocacy, policy formulation, co-ordination, monitoring and support, implementation, education and research.

For instance, the TUC should negotiate anti-child labour laws in Collective Bargaining Agreement (CBAs). Ghana Employers Association should monitor its members. The Media should play its watchdog, dissemination and information roles in addition to showing documentaries and giving publicity to child labour issues.

Laws punishing child labour practices should be enforced, while income generating activities were to be encouraged.

Other roles include: The enactment of legislation and reforms to address the issues of the worst forms of child labour; Cooperation and collaboration with implementing agencies and addressing the poverty issue.

It was agreed that if workers' conditions were improved they would be better off and the question of pushing out dependants on to the streets could be addressed.

Infact it was emphasized that if the economic status of the nation is improved, it would go a long way to minimize child labour. Mr Eric Okrah, National Project Coordinator ILO/IPEC, summed it up by stating: "The worst forms of child labour needed serious checks to ensure that the nation's human resource was not depleted".