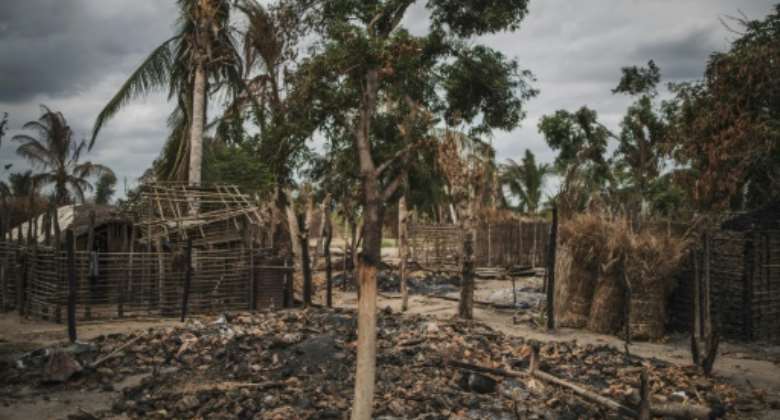 Torched: The village of Aldeia da Paz after it was attacked by jihadists in August 2019. By MARCO LONGARI (AFP/File)

Her severed head was placed in front of their door.

Her tongue had been cut out -- punishment for daring to talk back to the insurgents terrorising northern Mozambique.

She fled her home in Mocimboa da Praia after the killing and now lives in a camp in Montepuez, 150 kilometres (90 miles) away.

"I'm still terrified, I can't stop thinking about it," she said, her hair wrapped with a red-chilli-patterned headscarf.

When the Islamists showed up near her home, they ordered everyone outside.

"My sister-in-law spoke back to them, so they decapitated her," Assumane recalled.

"They placed her severed head in front of our house door and then they cut off her hands and placed them on her body."

The mutilations took place in front of the eyes of her son, who was then abducted by the insurgents.

Life is quieter now. The camp for displaced Mozambicans has grown to house thousands of people. While aid agencies are providing food, sanitation and water, a local economy is springing up.

Barbers and tailors have set up shop, and even accept mobile money payments. Children sell eggs laid by hens reared in the camp.

A shack with a rooftop satellite dish advertised the day's entertainment: the "Barcelonas vs Napoles" football match.

All around, roosters crow over the Mozambican rap blasting from speakers powered by solar panels.

The group known locally as al-Shabab -- though with no links to the Somali militants of a similar name -- have raided towns and villages, uprooting some 800,000 people. More than 3,700 others, including 1,600 civilians have died.

But attacks like the one on Assumane's village are less common now.

Since July, thousands of troops from Rwanda and the SADC regional bloc have deployed to shore up the Mozambican military.

The northern province of Cabo Delgado is the only part of Mozambique with a Muslim majority. The region has also turned out to have vast natural gas and mineral reserves.

Efforts to extract the natural gas have drawn the biggest-ever investments in Africa, including a $20-billion project from TotalEnergies.

Montepuez itself is rich in rubies, with foreign mining giants like Britain's Gemfields operating here.

Countless people have harrowing stories to tell, horrors that feel alien to the province's azure seas and white sand beaches.

But signs of conflict are everywhere. A military camp sits near the main airport in Pemba, where planes from Lesotho and Botswana are parked on the runway. This serves as an operations centre for foreign troops helping Mozambicans smoke out the insurgents.

Its chief operating officer Killen Otieno has worked in Somalia, South Sudan and other conflict zones, but he said the insurgency in Mozambique is "total devastation".

"In my 30 years of experience, I've never seen anything like what I've seen here in Cabo Delgado," he said.

Northern Mozambique has long felt neglected by the government. Communist rebels in the north fought a devastating civil war, when the country was a Cold War proxy battlefield.

Then rebels wanted to take control of the country. Now the insurgents say they want to establish a caliphate, but the real aims are unclear.

"I don't understand al-Shabab's intention," said ex-fisherman Cornielo Manuel, 31. "They were shouting 'God is great'," when they attacked, he recalled.

He rolled up his T-shirt sleeve to reveal bullet wounds in his shoulder.

He was resting at home one day when a group of men came sounding a gong.

They identified themselves as al-Shabab and started shooting, he said.

"Blood was flowing like a river. I counted about 50 men killed that day."

Franklin Cudjoe back calls for probe into Covid-19 expenditu...
32 minutes ago

North East: One killed in clash between two communities
32 minutes ago