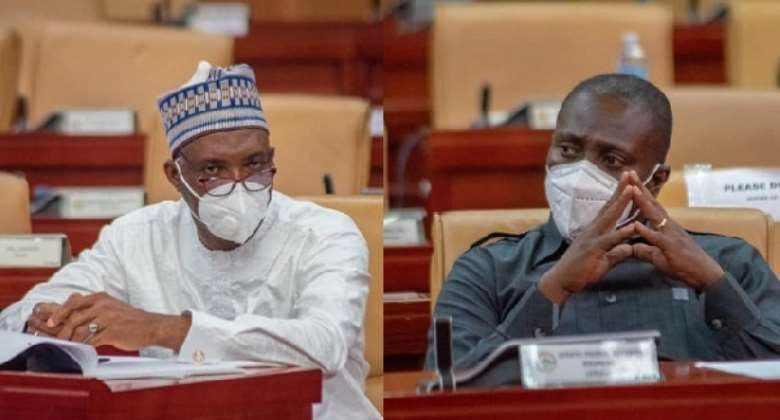 The Member of Parliament for Asawase in the Ashanti region, Muntaka Mohammed has condemned his colleague MP Alexander Afenyo-Markin for asking parliament to sanction media houses for the wrong reportage on his comments in parliament yesterday.

Speaking in parliament today, Muntaka Mohammed stated that, although he understood Afenyo-Markin's anger over the matter, it was not in his place to determine the editorial policy of a media house.

He added that, if the Deputy Majority Leader had issues with the said reportage, he should direct his complaints to the National Media Commission (NMC) and not the floor of parliament where the media houses had no say or representation.

He said the Deputy Majority Leader's use of parliament to seek redress on the matter was an abuse of his position.

He told the Second Deputy Speaker who presided over proceedings today, Honorable Andrew Asiamah Asamoah that he had personally listened and watched the tape and could testify that Mr. Afenyo-Markin mentioned the evacuation of Ghanaian students and linked it to the controversial E-levy.

“I have listened to the video more than 20 times, you mentioned Ukraine evacuation will cost money and it is the reason we should leave all this politicking. Dollar is having a challenge that is why E-levy must be approved. You said it, the video is here, I have forwarded it to all of them so you can disagree with how they framed their headline, but it is not for us to tell a news portal how their headline should be,” he said in Parliament.

The MP for Asawase indicated that it was not right for the Effutu lawmaker to demand that parliament sanctions media houses for the reportage on his comments when as an MP he knew the right place to seek redress.

“You may disagree with how they captured the headline, but it is not for us to determine how the headline should be and so please lets allow speakers ruling to stand, lets meet in confidence look at the thing together and if there’s a reason genuinely why you want what you want to be done then as a house we can come together, but you cannot insist that what you want be done your way. That cannot be right,” he advised Mr. Afenyo-Markin.

The Deputy Majority Leader and MP for the Effutu Constituency in parliament on February 24 stated that the E-levy was needed to support government evacuate Ghanaians stranded in Ukraine.

Afenyo-Markin is reported to have said, “as a businessman, I am worried. I am concerned knowing that the value chain is going to be affected, imports will cost, duties will cost and if you look at what is happening to the cedi, now dollar is moving around a certain figure.

“There is going to be pressure on the limited resources that we have and as a nation, Ghanaian businesses who are supposed to do well to pay taxes they are going to suffer, their businesses will not do well the way they expect, their projections will be affected, that is the reality and I must bring this to the attention of all of us so that any policy that will be brought will be seen in that light,”

“Of course Honourable Deputy Minority leader, you have not spoken into the mic but if you are talking about the E-levy, this is the more important reason why we need it. If you are talking about the E-levy, that was the next point I was getting to, that we should congregate around it and find a way of generating revenue as a country to save the situation because we are not in normal times. Haruna Iddrisu couldn’t have raised this matter at a better time than now.”

Following the backlash from Ghanaians who were appalled by his comments as the video went viral, the MP has beseeched parliament to look into the matter as he claims he did not suggest that the E-levy was needed to evacuate Ghanaians from Ukraine.

He prayed the Speaker to direct media houses to pull down what he described as misreportage of his words.

The Speaker however ruled that the matter would be discussed by the leadership.