US climate envoy Kerry in Egypt to discuss COP27 summit 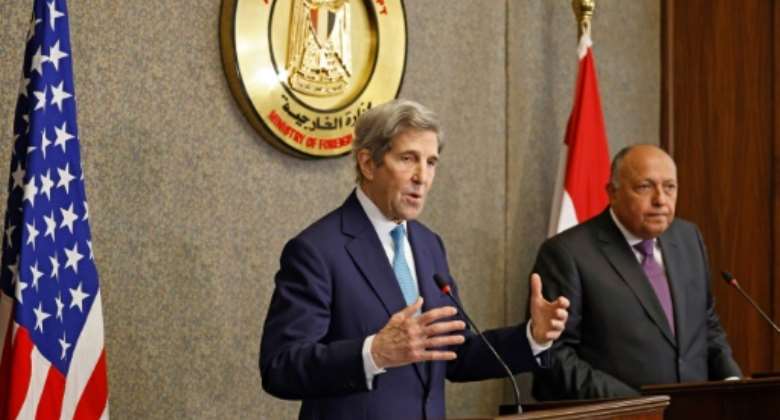 The United States and Egypt on Monday launched a working group to prepare for the COP27 climate summit this year, with US envoy John Kerry urging more countries to come on board.

The meeting will take place in November in the Egyptian Red Sea resort of Sharm el-Sheikh, seeking to build on gains made at the previous conference in Glasgow last year.

"In Glasgow, we made significant progress... we now need to bring more countries on board," Kerry told reporters in Cairo.

"This is about a threat to our planet and it is driving our considerations and our thoughts about how to deal with that," he said alongside Egyptian Foreign Minister Sameh Shoukry.

Pledges were made at the COP26 to phase down coal-fired power, curb methane emissions and boost financial aid to developing countries.

Kerry, who arrived in Cairo on Sunday, launched with Shoukry the US-Egypt Climate Working Group, to advance bilateral and multilateral climate goals ahead of COP27.

Egypt, with 102 million people, is the most populous Arab country, and its northern coast has in recent years faced the threat of rising sea levels due to climate change.

The country's coral reefs have also begun to gradually perish due to rising temperatures.

The Egyptian government has said it aims to increase renewable energy sources to 42 percent of its mix by 2035.

Shukri told reporters that talks with Kerry focused "in details about the priority of the Egyptian presidency for the next COP27".

Some rights groups have argued that Egypt should not have been allowed to host the upcoming climate summit due to the "repressive" policies of the government of President Abdel Fattah al-Sisi.