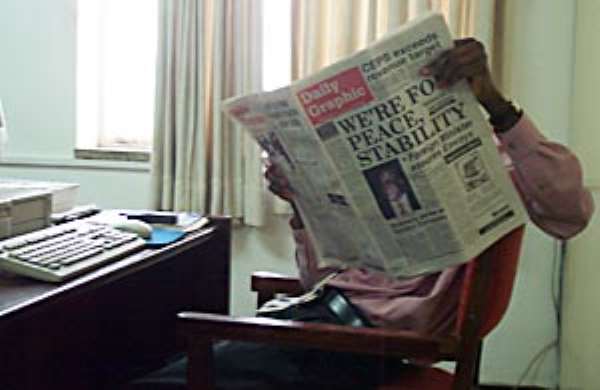 The story carried by Gye Nyame Concord on 15 March entitled “Graphic hands over 49% stake in West Africa for £1” was very sad indeed. It is not so much to do with the deal but the sort of decay and rot that is allowed in our beloved country today.

First of all, every company go through problems, but how come Graphic can allow an institution well over 85 years old to go down this way? This institution is older than any one working in Graphic today and if we cannot preserve our heritage, what future do we have as a people, a nation or a continent. I have been a subscriber to the magazine for 30 years and can name every editor over the years. The value of the publication is without question to any of us the committed and devoted readers of this Africa's most respected publication. What I need to understand though is how come Graphic can allow the magazine to go this way? In fact, who took that decision and at what meeting was it decided? If it was by the Board, then I am afraid the whole board must go!

It is very frustrating for some of us because speaking on behalf of subscribers; it is very painful to know that you can pay a year's subscription to an institution only to have nothing back. Phone lines were not working and emails kept bouncing back. And all this was from a company that has a State-owned outfit as the main investor. How sad. I once read a letter to the editor by a very regular contributor to West Africa, Herman Afele who was reminiscing on the bad sense of African people and what needs to be done. I am sure Afele has been around for years as well as I have seen his contribution to the magazine for years.

Today I still sit with old issues of the magazine just to read what is in there. It is that good.

It is obvious that Graphic and for that matter the MD is not aware of the sort of embarrassment that they are causing to the people of Africa. Does it really mean that the MD did not see it coming and if he did, why did he not prevent it in the interest of the State?

With all the hue and cry in Ghana about causing financial loss to the State, what is more perfect than this? And should this man be allowed to stay in his current job, it will be an embarrassment. I am very positive there are a number of subscribers in my current position.

What saddened me was the claim by the paper that “This paper's checks revealed that the telephone lines of the offices of West Africa magazine in London have been severed because of lack of payment of bills and the company itself is completely mired in immobility”.

No matter what the arrangement is with the company in the UK, Graphic owed it a duty to all Ghanaians to protect their investment. So what explanation do they have for all Ghanaians now that the company is no longer a going concern? So was there any formal complaint made to the Ministry of Information about this and what was the response or it was just a case of the government cannot afford to help?

Now that he has managed to collapse an 85 years old institution, he should do the honourable thing by resigning.

Also, what is the connection between a Romanian and West Africa magazine? If the company, as the reporter said did not have any media experience, then what is the real motive in taking a stake in West Africa in the first place. Or was it just a clandestine move to oversee the demise of the publication.

The claim by Mrs. Cecilia Davies (Solicitor Secretary of Graphic) “that they would soon meet Moskovitch and his company to discuss the future of the magazine and should there be any logjam between them after the meeting, Graphic would not hesitate to sever their relations with him and his Media Africa Group Company” is the most pathetic. Is it that Graphic was not aware of what was happening. This is too little too late, it seems. Ghana today heads the ECOWAS and the minimum we can do is to uphold an institution, which, is even older than ECOWAS. Heads must roll, and the Graphic MD should be the first to go. Berefi Apenteng must go. Kwabena Yiadom-Boakye Retired- (social commentator) Views expressed by the author(s) do not necessarily reflect those of GhanaHomePage.