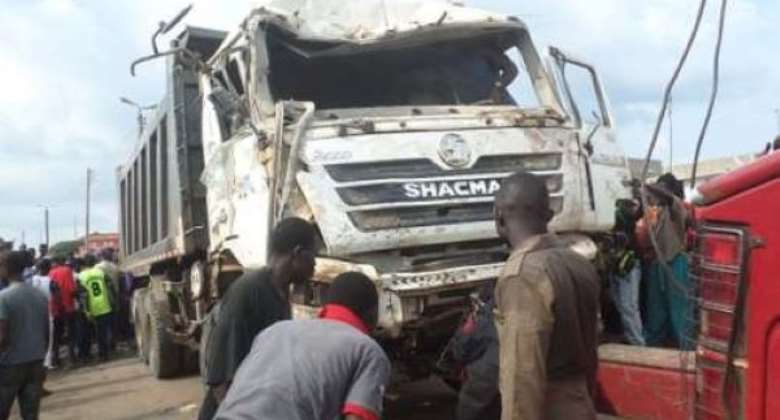 A 37-year-old laboratory technician with Kwame Nkrumah University of Science and Technology (KNUST) hospital, Emelia Amekuji has been confirmed dead after an articulator truck ran over her at Anloga junction in the Oforikrom Municipality of the Ashanti region.

The incident occurred on Thursday, 10 February 2022.

The deceased's four-month-old baby who was with her during the incident together with six passengers onboard other commercial vehicles also sustained injuries.

The woman and her baby are reported to have alighted from a commercial bus when the incident occurred.

“This accident started from Boadi junction. I was in a trotro from Ahomaso to town, our driver was in the inner lane, the Sonata was in front of us and when we got to Boadi junction roundabout, instead of the Sonata going to the outer lane to take the roundabout, he was in the inner lane. Luckily, the Police confronted him, so if our driver had not swerved, he would have ran into the Sonata.

“He dodged the Sonata and came to the outer lane and there was a truck behind, but our driver was able to make it though we were scared. When we got to Tech Junction, the truck driver confronted our driver for crossing him earlier and threatened to kill him and the passengers on board. But we kept going till Maxima, where the truck driver parked in the middle of the road, and came out with a jerk threatening to hit our driver with it. Our driver was able to go in front of the trailer, all we saw is that he ran into us, and killed the woman instantly. Her baby was rushed to the hospital. His brakes did not fail,” an eyewitness explained.

The truck driver has been arrested by the Oforikrom Police.