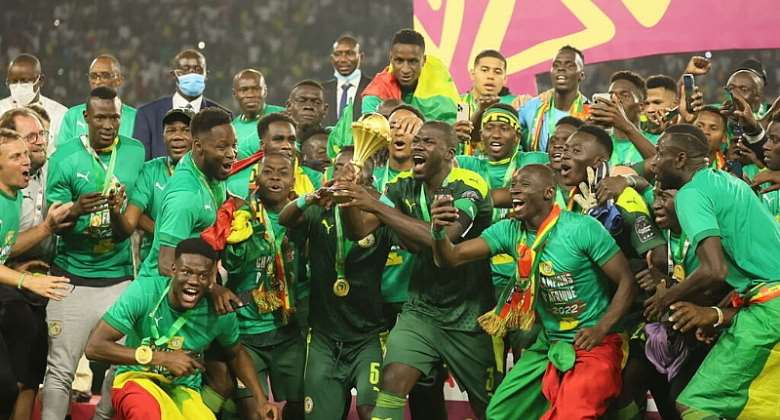 It was a game of two penalties. Senegal's star striker Sadio Mané missed a spot kick seven minutes into their Africa Cup of Nations final against Egypt. Nearly three hours later, he buried the penalty in the shoot-out that brought his country its first trophy in the 65-year history of the competition.

What came in between the nadir and the apotheosis ranged from gruelling to excruciating and downright frustrating.

Senegal, beaten finalists in 2002 and 2019, took the game to an Egypt side who appeared to revel in absorbing the pressure.

Star
Instead of playing to the strengths of their skipper and wonder striker Mo Salah, the tactic – hatched and honed against lesser opposition throughout the tournament – appeared to privilege defensiveness and negativity.

Even after the reprieve of Gabaski's early penalty save, Egypt continued to live dangerously.

Ismaila Sarr, a substitute in Senegal's surge through the knockout stages, started down the right and his rangy running provided two tantalizing crosses into the box.

Miss
Mané failed to connect on both occasions. Sarr even had a crack from distance but the lash failed to trouble an increasingly impregnable Gabaski.

The match settled into a familiar pattern. Assaults on the Egypt goal and then destruction on the counter-attack.

On one such foray down the right just before half-time, Salah twisted his way in between two defenders and shaped to cross but instead fired a shot towards the top right hand corner of Edouard Mendy's goal.

It was palmed away.
Egypt showed they could threaten along other avenues.

With 15 minutes remaining and the game scoreless, Marwan Mehany muscled his way in front of Abdou Diallo but his header dropped wide of Mendy's left post.

It was the start of sustained menace. Egypt's midfield kept the ball, diligently attempting to puch a hole in the Senegalese rearguard. The skill begged the question: why play like barbarians?

Saves
Senegal maintained their nobility. In the opening minutes of extra-time Cheikh Dieng was sent clear down the left but he failed to ram his shot past Gabaski.

He flung himself to his left minutes later to beat away Dieng's goal-bound header.

It was one of the parries that earned him the man-of-the-match award. Mendy showed his mettle pushing Mehany's drive over the bar. It fizzled out after 120 minutes and no goals to the one-on-one.

For the third time in the knockout stages, Egypt broached a penalty shoot-out with a goalkeeper defying the space-time continuum.

Gabaski was close to Senegal's first two penalties but could not keep them out.

Egypt defender Mahmoud Alaa Eldin slotted in to level proceedings at 2-2. Dieng finally outwitted his nemesis to make it 3-2 to Senegal and Mendy dropped swiftly to his right to stop Mohanad Lasheen's effort.

That paved the way for Mané. He embraced a few of his teammates and strode towards legend.

"It's was a long and difficult match. We missed the penalty and several other good chances but we never gave up. I think that shows the mentality of this team."