Is Inspector Sarfo Andrews the New Hope in the Ghana Police Service? 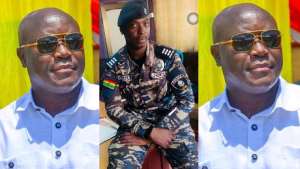 I heard a clip of an exchange between a police officer and the Chief Executive of Sekondi-Takoradi Metropolitan Assembly on Citi Fm Breakfast Show on Friday 4 February 2022, and I could not believe what I was hearing. Despite disagreeing with the police officer telling the MCE , “I will teach you a lesson”, I was really impressed with the police officer on how he dealt with this out of control MCE, who holds himself as honourable. This article is a discussion of the general abuse of power, authority and office by public officers in Ghana and the misuse of the title, honourable.

When I logged onto Ghanaweb, there was a full report of the exchange and I asked myself, “wow, is this the attitude of a presidential appointee”? The police officer in question was Inspector Sarfo Andrews. I had nothing but admiration for him and I wished the Ghana Police Service had many Inspector Sarfo Andrews. He even refused to speak to a superior officer, who is reported to be Chief Inspector Dorcas.

As a Ghanaian, this came as no surprise to me because that is the norm in Ghana. Public and elected officers in Ghana believe that they are above the law and therefore they should be given special treatment. They disobey traffic regulations in the cities, towns and on the highways. What was exceptional or strange in this incident was that, a police officer had the balls to stand up to this out of order MCE.

The abuse of power, authority and office by the ruling elites, the rich and the powerful in Ghana began from independence and continued till today. However, it got out of hand during the political interventions by the military and is at its apex in the fourth Republic. The exacerbation of this lawlessness could be blamed on all of us who allowed such nonsense by a few, including the media in Ghana because of our obsession with titles.

Every damn fool public officer in Ghana is referred to as honourable and as a result, these dishonourable men and women have allocated to themselves powers and privileges that they do not have or deserve. Journalists are the worst offenders. Often journalists interviewing ministers, heads of public institutions, MMDCEs, assembly members and others refer to them as honourable. Where and how we got here in the Fourth Republic is a mystery to me.

It is no surprise that the Sekondi-Takoradi MCE, Mr Abdul-Mummin Issah had the audacity to threaten a public officer with transfer for carrying out his legitimate duties when he had violated road traffic regulations. He threatened to deal with Inspector Sarfo Andrews so that he would come and beg him. In reality, these are all empty threats but in Ghana, these are the norm not the exception. Perhaps, this MCE was unlucky or Inspector Sarfo Andrews is the lucky one because the threats by the MCEs and politicians in Ghana are carried out.

Public officers like this MCE and their collaborators such as Chief Inspector Dorcas are always able to get their way, by disregarding the laws, rules and regulations in Ghana. There are many police officers who have been sanctioned for enforcing the laws, rules and regulations against senior public officials, especially elected politicians as well as the rich and powerful in society. That explains why there is that much lawlessness in Ghana. In fact, some police officers also take the laws into their own hands by teaching members of the public a lesson, which is nothing but revenge or abuse of power, authority and office.

Until Ghana and Ghanaians change their attitude to law enforcement and compliance, where no one is above the law, we will continue to have dishonourable public officers such as Mr Abdul-Mummni Issah illegally bearing the title, honourable and misbehaving in public.

This incident also tells as that as a society, we punish some junior public officers for doing the right thing of enforcing the laws, rules and regulations when it is against someone in political office or rich a powerful person. The MCE threatened to transfer the police officer for carrying out his legitimate duties. Inspector Sarfo Andrews is probably lucky because others have not been as lucky as him. They were dealt with through transfers or no promotion for stepping on the toes of the dishonourable.

To stop the lawlessness and impunity by public officers, especially politicians whose ostentatious lifestyles are financed by tax payers, we need more of Inspector Sarfo Andrews and less of Mr Abdul Mummni-Issah and Chief Inspector Dorcas. I will therefore call on the IGP to discipline Chief Inspector Dorcas to send a message to other senior officers that they cannot interfere with the work of law enforcement officers when they are in the right against political office holders or the rich and powerful in society. I will also urge President Nana Akufo-Addo to relieve the MCE of his appointment for his behaviour and bringing his office into disrepute. The suspension is not enough. That will send a message to all his appointees that they are not above the law.

In every society, there are some who think and believe that they are above the law and should be treated special, such as the UK Prime Minister, Mr Boris Johnson and most of his Conservative MPs. Such people do not only think they are special but also believe that the weak, poor and vulnerable should not have the same rights as them. For this reason, they attempt to enact laws that restrict fundamental human rights enjoyed by all such as the right to vote, the right to freedom of expression, the right to demonstrate, etc. Such people are threats to democracy and the rule of law and should not be allowed to have their way.

In this incident and the abuse of the title, honourable, Inspector Sarfo Andrews is my hero. Well done Inspector, you deserve an award from Ghana. We need many of you in the Ghana Police. For Mr Adbul Mummni-Issah and his cohorts, this is a warning to you that you must turn a new leaf, stop using the title honourable and begin to obey the laws, rules and regulations as everyone because you are servants of the public, paid by the public. Tow down your ego and humble yourselves. For MPs, please use the title honourable only when you are in parliament and revert to Mr, Mrs, Dr, Professor, etc when outside parliament. Finally, members of the public, including journalists must stop referring to any public officer, whether elected or unelected as honourable, unless in written correspondence. Even within parliament, unless you are an MP, you cannot refer to an MP as honourable because the title is for the exclusive use by MPs only within parliament.