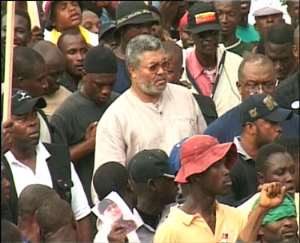 “You can fool some people sometime, but not all the people all the time, so now we see the light” - B Marley
Besides our first President, Dr Kwame Nkrumah, no political leader has had as much of an impact on Ghana as Jerry John Rawlings, whose legacy for Ghana, ironically, is one of the most peaceful and democratic dispensations on the African continent. A visceral dislike for the ex-president is boxing many otherwise sensible people into a corner because they cannot bring themselves to see his achievements or agree with anything he says. How else to explain the churlish reaction among so many? Argument I: Rawlings is half-Ghanaian Jerry John Rawlings was born and has lived all his life in Ghana. While many may argue that the current NPP Government is made up of “real” Ghanaians, it is important to keep in mind that fine, old adage: not everyone born in a stable is a horse. Argument II: “Nothing was done in 20 years”. The current NPP administration uses this line of reasoning to hide their incompetence. A well informed administration would have said "Not enough was done in 20 years". The following events (ALL PROVEN FACTS) took place during the 20 years of Rawlings when “nothing happened”: According to the Economic Commission for Africa, poverty in Ghana has declined from 52 per cent to 40 per cent over the past decade, i.e. 1992-2002 Ghana was the first country in West Africa to get connected to the Internet in the 90s thanks to the foresight of the Rawlings/NDC administration. Today, Ghana's capital city of Accra boasts about 500 Internet cafes, roughly six times as many as London. Public telephone booths: Ghana had 30 in 1995. In 1998 it has mushroomed to 1,814 Decentralization of Government, i.e. creation of District Assemblies was implemented under Jerry John. Freedom of Press: Kufuor and his cohorts want us to believe this happened in the last 3 years. Most of the FM stations, all independent TV stations, and private newspapers we have today, were established under the Rawlings administration. In the 90s we already had had radio phone-ins, opposition papers (Accra Daily Mail, Statesman, Independent etc). Ghana stock exchange was setup in February 1989 under Rawlings. According a United Nations' Food and Agriculture Organization annual hunger report, after declining for years, the number of people in the world who are going hungry is on the rise. However, Ghana succeeded in reducing the number of undernourished people throughout the 1990s. The only national theatre, and the most unique building we have in central Accra, was built in the 90s. Prior to this the art council, which is an eyesore was out national theatre. Aboadze Thermal Plant was built when Rawlings was in power Tema Oil Refinery was built & expanded under the Rawlings administration Mobile Phones networks: Ghana had 3 operators in the 90s, while most Africa countries had none. Ghana was the first to get a digital network in West Africa. Education: In 1979, Ghana had 3 universities. Today there are over 10; 2 more Government ones (Winneba and University of Dev Studies) and the rest are private. If the climate was not good, how come private enterprise set these up? We have a polytechnic in almost every region; majority of them were built under the Rawlings administration According to “the world bank” road networks in Kumasi, Northern, Brong Ahafo and other parts of the country have inproved considerably in the last 15 years. (NOTE: not last 3 years) Only two companies in Africa, outside South Africa, had a market capitalization of more than $1 billion in the 90s: One was Ghana's Ashanti Goldfields. This was achieved under the Rawlings regime In a desire to beautify and decongest Accra, the Kanda and the Sankara interchanges were consequently built under Jerry John Moslems were recognized under the Rawlings regime: Eid-Ul-Fitr was made a holiday in Ghana Sports: Ghana won an African Nations Cup; Two U17 world soccer championships; two African club championship; Four world boxing titles. Today our national soccer team is a mockery. Free & fair Elections: Rawlings was one of the few heads of states in Africa to have organized a free and fair election. Most African leaders who ruled or are ruling as long as Rawlings - Mobutu (Zaire), Siad Barre (Somalia), Mengistu Haile Mariam (Ethiopia), Mugabe (Zimbabwe), – left or will leave their country in chaos. …etc Argument III: Rawlings Left Ghana in Huge debts In 2000, Ghana had a total debt of US$5.5 billion, accumulated since 1966 & not only within the last 20 years as NPP will want us to believe. In just 3 years, our debts have ballooned to $7.8 billion. You do that maths. Argument IV: Atrocities Most detractors remember the bloody days when Rawlings' supporters killed their opponents, the days of witch-hunts against the middle class, the revolutionary days. For his last years in power Rawlings was elected to office and under his rule Ghana has developed into a peaceful, democratic country. Nobody can dispute the fact that atrocities were committed under Rawlings. However, only a dim-witted will disagree that atrocities were committed under so called Great presidents/heads of state; E.g. Kwame Nkrumah (Ghana, Political persecution), Roosevelt (USA, Slavery, racial discrimination, Lynching), Churchill (Britain, Colonization, racial discrimination), Mahatma Gandhi (India, Caste murders, discrimination) etc For people who claim to believe in the rule of law and the principle of “innocent until proven guilty”, it’s hard for me to contemplate why all the hullabaloo. There is currently an anti-Rawlings government in power. All they have to do is prove to Ghanaians beyond reasonable doubt that Rawlings was directly involved. Most readers have heard the rumor that President Kufuor was involved in the murder of the Ya-Na. Do we have to believe this or do we wait for it to be proven?
History will certainly be judge, not the Nail Rawlings Comission (NRC) or the No Policy Party (NPP). Views expressed by the author(s) do not necessarily reflect those of GhanaHomePage.