Beyond E-Levy, How about Taxing the Church - Godfred Adjabeng 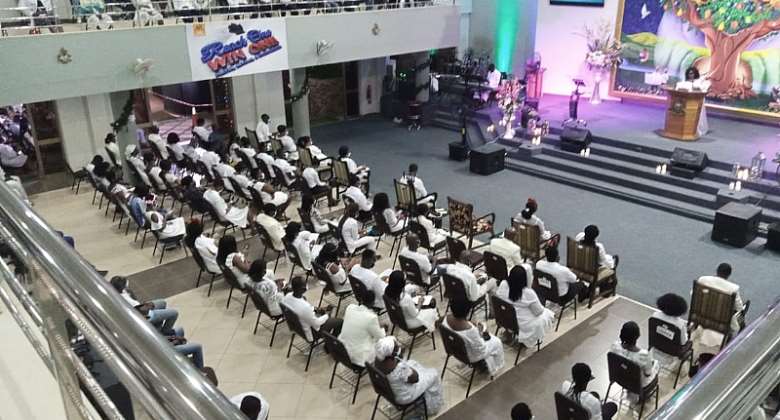 When Christ Jesus gave them the answer “Give back to Caesar what is Caesar’s and to God what is God’s.” at Mark 12:17, it was “tribute to Caesar”, taxes, that he had been questioned over. What the Lord left to us was the issue of whether or not, as mortals full of faith in the gospel, it shall or shall not offend the Lord that we tax the church. I am yet to find scriptures that forbid the hands of the nation- the government if you will call it- from ever demanding a quota of what the church receives from the people.

In fact, the bible neither forbids nor encourages the taxing of the church. We can however justify any of the two positions by seeking different verses of the Holy Book, reading them holistically and spiritually and placing interpretations on them to arrive at a conclusion. I am no Aristotle of the Bible nor am I a Lord Denning of the Holy Book.

The Electronic Transactions Levy (E-Levy) sought to be introduced into Ghana’s tax net in 2022 seems to have awakened more divergent opinions among the populace than any tax related policy by any government in the last decade. Even the House of Parliament has not been spared of the chaos and drama.

The impact of the covid-19 pandemic has been more brutal and violent on the economies of several nations. Undeniably, government responsibilities towards its citizens must still be met anyway. This is what the government has been attempting to do.

One can tell that taxes on electronics transactions would have been the last resort of this NPP government, considering the commitments and efforts made so far towards the digitisation of the economy. The government will obviously be shooting itself in the foot if, in spite of all the investments and efforts made towards ensuring the adoption of a cashless society, it can go back to taxing the same efforts thereby making their efforts unattractive to the people. But, there is a justification.

The economy of Ghana has not been strong enough to withstand the Covid waves like many developed countries. Countries like the United States even provide stipends to aid its citizens to overcome the short term effect of the pandemic wave, whilst it puts plans in place to cushion the citizens from any long term effect.

Unfortunately Ghana does not have a robust economy to shield its citizens. What it therefore intends to do is to tap into all available resources, deploy all available policies and utilise all revenue creating ventures to sustain the system.

It is apparent that there is the inevitable need to service debt obligations, pay salaries, create employment, enhance the current state of social amenities among other things. Truth be told, Ghana needs money it presently does not have, and the little available have also been deployed in all manner of ventures, chief of them all is the sustenance of the impact of the international pandemic.

It is for the above reasons that the government is relentlessly fishing for genius means to collect enough revenues to power its governance machinery. The E-levy, as the discussions in the public space will inform, is one such approach.

However, it is my considered opinion that there are several untouched areas that the government ought to be looking at in order to liberate itself from the financial difficulties within which it finds itself. Such areas include but are not to the church- to tax some, if not all, of the revenues generated by the church. After all, is the church not the spiritual and religious entity responsible for the continuous comfort and existence of the Lord’s flock?

The church, even though it has enjoyed decades, and even centuries, of immunities from the payment of taxes, should now be a serious consideration on the table of the government. Admittedly, this will not come as an easy step. We do also know that the issues confronting the country presently are not easy either. Monies received by the church from churchgoers, for the purpose of this article, can be classified into two (2). The first being FAITH BASED PAYMENTS, and REQUEST/DEMAND BASED PAYMENTS.

These faith based payments are those that have a direct justifiable roots from the Holy book. These are the payments made to the church based on the individual's level of faith and understanding. Examples come to mind. Tithes can be classified as a faith based payment. It provides the spiritual flexibility to the individual to determine the amount to be paid and the duration and frequency at which the payments are to be made. As a matter of fact, in some churches, the amount paid to the church as tithe remains secret to other church members.

Offertory is an example. Whether or not a member of a church pays offertory remains a voluntary decision. In cases where the member decides to pay offertory (which is the equivalence of the individual’s personal contribution towards the development of the church through various projects), the amount paid and the frequency at which it is paid remains the exclusive preserve of that particular member. For now, and in most churches, no earthly consequences befall a member who decides not to engage in the faith based payments. The only consequence is that which may arise between the individual and God.

The request/demand based payments are the payments made to the church through requests by and from the church. Some of these payments usually have commercial underpinnings and are usually predominant in the churches commonly described as the one-man-churches. Request based payments are made in respect of consultations and sales of spiritual items. In some churches, an amount is required to be paid before a person is permitted to have a one-on-one meeting with the spiritual leader. This amount varies from churches to churches.

The amount "demanded" as a precondition for meeting a spiritual leader can go as high as Five Hundred Ghana Cedis (GhC 500) per person/session, depending on the kind of spiritual problem an individual may have and how the individual would want the meeting with the "Man of God" to be. In most cases, how long the meetings will take will be influenced by the amount paid by the individual. Under this payment, a members failure to make the necessary payments comes with "earthly" consequences. For example, a person is not likely to see the "Man of God" for the desired consultations without the payment of the fees demanded.

Even after paid consultations, the individuals are sometimes given "spiritual items" at a fee for their use. These items, in simple terms, are SOLD to the buyer for their spiritual healing. However, as things stand in the country, all those items and revenues made therefrom by the churches remain cushioned from the hands of taxes. It is surprising why a pharmacy that sells drugs to cure diseases is amenable to taxes, but a church that sells "anointing oils" for the healing of the same diseases are not taxed.

In these hard times where the country is in dire need of resources to sustain itself from sinking, we might want to revisit our tax regime on churches soon, if not now. Whereas, at least for now, we might want to leave faith based payments to the church untouched by our tax laws, the same “privilege” should not be extended to the request and demand based payments.

A church that ventures into the sale of “anointing oils”, “biblical handkerchiefs” and “gracious powders” among others should be willing to do the greater work of God by surrendering a percentage of their proceeds to the government. Whatever proceeds are made from these church-taxes will be used to enhance the socio economic benefits of the citizens, including the church members, in order for them to enjoy a better life here whilst preparing for the heavens.

“I will instruct you & teach you in the way you should go; I will counsel you with my eye upon you”

It is argued, under the instructions and teachings of the Lord, that some, if not all, of the church should be willing and open to be taxed if this is what will bring true liberation to the people of the Lord- Ghanaians. The country is at a point where there is the need for urgent interventions. Interventions that are inevitable if the country is ever going to be on its feet during this covid era.

The way to go, I believe, is to seek refuge from all available sources. The church, being the shepherd of the Lord’s people, should be willing to subject itself to the collection of taxes. The church should surrender a small percentage of the proceeds from the sales of spiritual ointments and anti-witchcraft balms etc., to help resurrect our economy if need be.

In a country that touts itself with more churches than companies, and more church buildings than factories, I believe, still under the instructions and teachings of the Lord, that tapping into the “financial grace” of the churches by the government will be far from a sin. And even if it be a sin, it shall not be a sin greater enough to wipe the mercy and grace of the Lord upon his people.