E-levy: So long as we depend on loans, foreigners will dictate pace of our development - Ursula Owusu 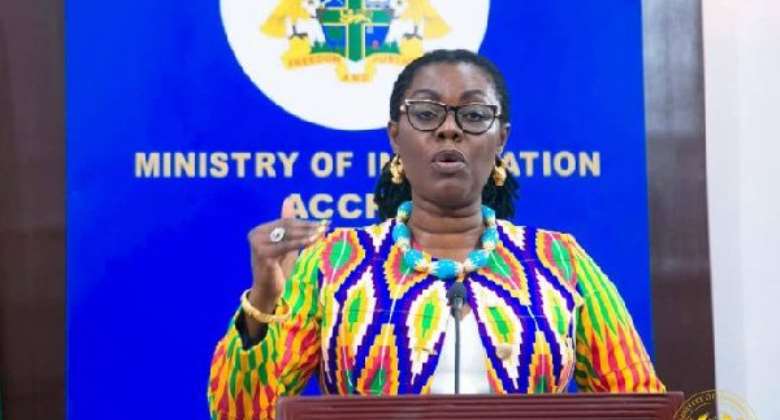 If Ghana does not wean itself from seeking aid from other courtiers, foreigners will continue to dictate the pace of the country’s development, the Minister of Communications and Digitalisation, Ursula Owusu-Ekuful, has said.

Making a case for the introduction of the E-levy in the 2022 budget statement, she said in order to be truly independent, Ghana would need to increase domestic revenue mobilisation to undertake the needed development.

Speaking at the Government Townhall meeting on the E-levy proposal in Koforidua on Thursday January 27, the Ablekuma West Member of Parliament said ” so long us we depend on loans they will dictate the pace of our developments.”

“We need to find the way to increase domestic revenue mobilisation,” she added.

“We are talking about a Ghana beyond aid, we need to be able to finance our own development and stop the dependence on either loans or grants or aid from other countries if we are to be truly independent.”

The Townhall Meeting forms part of the stakeholder engagement the government is undertaking on the E-levy proposal.

The Majority Leader in Parliament Osei Kyei Mensah Bonsu had Parliament on Tuesday January 25 that further stakeholder consultations were ongoing on the proposal hence the inability of the Business Committee to programme it during the first week of the first setting of the second session.

The Business Committee, he said, hoped to programme the proposal for consideration in the second week after the engagement.

The Suame Lawmaker explained the absence of the E-levy proposal on the Order Paper saying “Mr Speaker, as Honourable members will recall the House was expected to conclude consideration and passing of the electronic transfer levy bill 2021 by the end of the third meeting for the first session.

“Due to unforeseen circumstances however, the House was unable to consider and pass the bill at the end of of the meeting. It was therefore the contemplation of the Business Committee that the Bill will be scheduled for consideration by the House during the First week of the first meeting of the second session.

“However upon consultation with the sponsoring Minister the committee is not unable to programme same for this week after resumption.

“The committee, in all probability, will programme the bill for consideration in the second week of this meeting and honorable members are therefore encouraged to participate fully in the consideration and the process of the passage of the bill.”