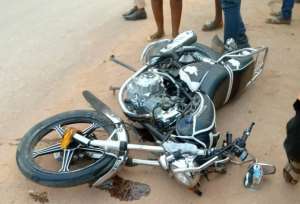 An accident involving a motorbike and a truck on the Accra-Akosombo highway has resulted in the death of two men.

The accident happened on Thursday, January 27, 2022, when two mean and a woman were travelling on a motorbike.

Information gathered indicates that the rider of the motorbike, Amoako Osae Emmanuel made a wrong overtaking resulting in the motorbike hitting the rear tyre of a vehicle.

He lost control and ended up crashing with an Ashok Truck that was also approaching.

On the spot, sources confirm that the rider Amoako Osae Emmanuel died while the other male passenger, Ketsi Cecil, a manager at Adi Lake all in Asuogyaman District also died.

The other woman on the motorbike, Gladys Asare was thrown off before the collision with the truck and fortunately managed to survive.

She however sustained severe injuries and had to be rushed to the VRA Hospital to receive medical care.

The bodies of the two deceased men have been deposited at the morgue of the VRA Hospital for preservation.