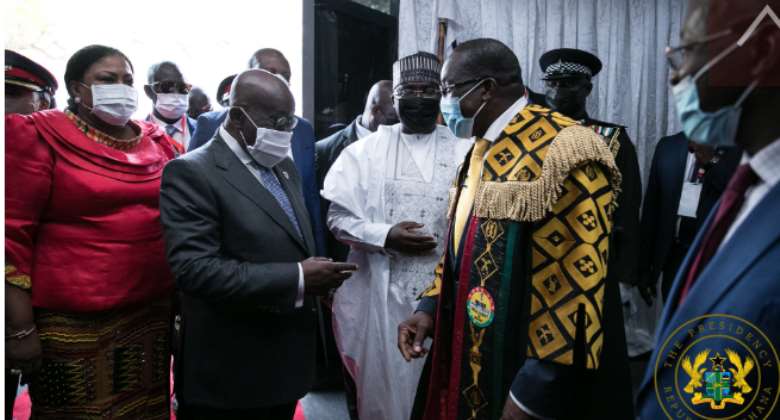 The Paramount Chief of Wa and overlord of the Waala Traditional Council, Naa Fuseini Pelpuo lV has implored his Excellency the President Nana Addo Danquah Akufo-Addo to take steps to address the security issues of the Speaker of Parliament, Rt Hon Alban Bagbin.

This call was contained in a statement signed by the Naa Fuseini Pelpuo lV and released to the media dated 21st January 2022.

This latest action by the revered Paramount Chief follows the furore generated in the wake of the decision by the Ghana Armed Forces to withdraw some four military officers attached to the security detail of the Rt Hon Speaker of Parliament citing procedural breaches as the reason.

In the statement by the Overlord of Wa, he stressed the need for the security and safety of the Rt Hon Speaker of Parliament to be prioritised and called for adequate measures to be put in place in that direction.

According to him, the Rt Hon Alban Bagbin’s ascension to the high office of Speaker of Parliament means so much to the good of the Upper West Region and as such, the region has been worried and concerned about the unfortunate development in the matter of the withdrawal of his military attachment.

It is the considered view of Naa Fusieni Pelpuo IV that the powers that be especially the Commander-In-Chief of the Ghana Armed Forces will rise to the occasion and offer the needed direction in resolving this impasse as a matter of urgency to give the Rt Hon Speaker of Parliament the peace of mind and focus to concentrate on his mandate of presiding over the legislative arm of government.

This latest call by the revered Overlord is one of several such calls that have been made by other statesmen, organisations and institutions since this decision was taken by the Ghana Armed Forces.

Reclassify Achimota forest as reserve; it's a dangerous prec...
4 minutes ago

Wheels of Justice turn fast against Vormawor but slow for Ma...
4 minutes ago