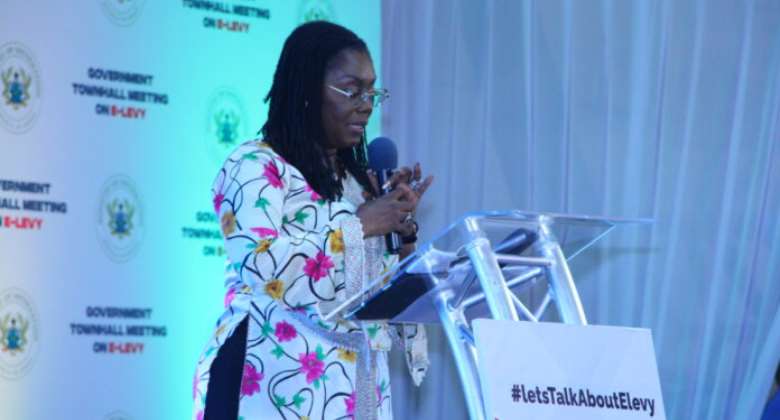 The Minister in charge of Communications and Digitalisation, Mrs. Ursula Owusu-Ekuful has said at a time where businesses are moving from physical locations to online, the introduction of the Electronic Transaction Levy (E-Levy) is reasonable.

Speaking during the government’s town-hall meeting in Koforidua on Thursday, she disclosed that last year alone, over Ghc44million was spent by the fashion and beauty industry through electronic platforms.

She said unfortunately, the Ghana Revenue Authority (GRA) without an E-Levy could not receive the equivalent tax because it had no means.

“Businesses have moved from physical locations to online outside the reach of the GRA, depriving the government of much the needed revenue. We need to revert that and the E-Levy would do that.

“It would enable the government to build proper digital infrastructure, create digital market place which would connect buyers and sellers,” Mrs. Ursula Owusu-Ekuful.

While calling for support for the E-Levy to be passed, the Communications Minister emphasised that it would go a long way to push government to achieve the Ghana Beyond Aid agenda.

“If the funds are not generated internally, we will either go and beg for aid, borrow and so we cannot continue to go borrow and beg to finance our development. The government is seeking to meet its agenda of Ghana Beyond Aid and this requires all of us to support the E-levy and contribute our quota to national development,” Mrs. Ursula Owusu-Ekuful added.

The proposed E-Levy when approved by Parliament in its current state would see transactions conducted electronically that exceed GHS100 being charged a 1.75% tax.

The Minority in Parliament amid consultations with the Majority are still against the levy and are unrelenting in their efforts to have the new tax scrapped.