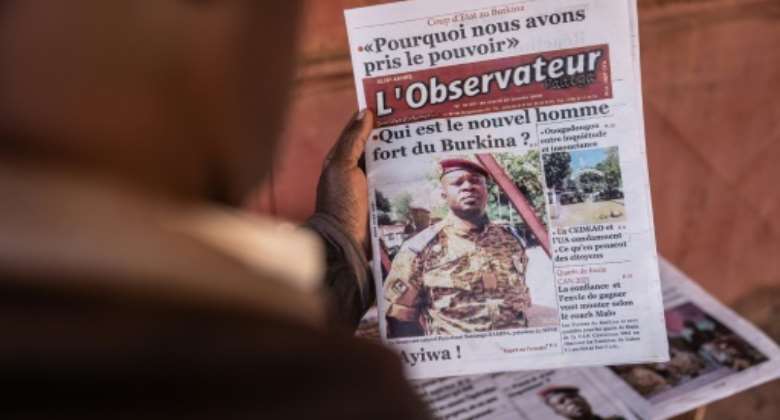 The leader of Burkina Faso's new military junta called for international support in his first major public intervention Thursday on the eve of a regional summit that could seek to sanction Ouagadougou.

"I call on the international community to support our country so it can exit this crisis as soon as possible."

Heads of the Economic Community of West African States (ECOWAS) are to confer on Friday over how to respond to Monday's military coup.

Kabore was ousted by mutineering soldiers on the back of public anger at his failure to stem jihadist violence ravaging the vast west African nation.

Earlier Thursday, around 20 trade union leaders met for about half an hour with the junta at the presidency in the capital Ouagadougou.

Damiba "assured us that we will be consulted and included in what will be put in place," said Marcel Zante, who heads a federation of 130 unions.

"Now we are waiting to see what happens on the ground," he added.

Damiba, 41, is a rising star in the military who commands an eastern region that has been badly hit by jihadists.

On Wednesday, he met ministers of Kabore's government, which like the parliament has been dissolved.

The junta has also suspended the constitution, vowing to re-establish "constitutional order" within a "reasonable time".

Ministers not to leave

The coup is the latest bout of turmoil to strike Burkina Faso, a landlocked and poor state that has suffered chronic instability since gaining independence from France in 1960.

On Tuesday, ECOWAS issued a statement to say the bloc "firmly condemns" the coup, accusing the military of forcing Kabore to resign "under threat, intimidation and pressure".

Those two countries have been suspended by the 15-nation bloc, which has also imposed an array of sanctions on them, including measures against individuals.

Clement Sawadogo, deputy head of Kabore's People's Movement for Progress (MPP) party, said "the junta has to do its utmost to prevent international sanctions on Burkina Faso."

He called for a "wise solution, to prevent an ongoing security crisis... from intertwining with a socio-economic crisis".

Kabore, 64, was elected in 2015 following a popular revolt that forced out strongman Blaise Compaore.

His well-being and whereabouts have been a key issue since the coup, with the United Nations leading calls for his release.

On Wednesday, a source in the MPP told AFP that the army was holding Kabore in a villa under house arrest.

"He has a doctor available (and) access to his mobile phone, but under surveillance, obviously."

Separately, the military prosecutors' office said the trial of the alleged assassins of revolutionary leader Thomas Sankara, gunned down in the 1987 coup that brought Compaore to power, would resume Monday following the unrest.

The trial, which began last October, is being closely followed in Burkina, where the aftershocks of the traumatic events of 1987 are still felt.

Those on trial include Compaore, who fled to Ivory Coast after being toppled in 2014 and is being tried in absentia, and his former right-hand man, General Gilbert Diendere.

Diendere is serving a 20 year jail sentence on separate charges linked to an attempted coup in 2015.

The prosecutors, in their statement, denied rumours that Diendere had been freed during the coup.