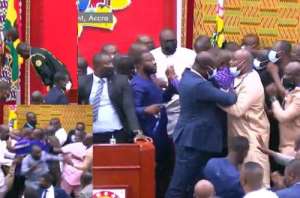 The Majority in Parliament says it regrets the brawl that occurred in the House in 2021 and will from henceforth ensure nothing of that sort happens again.

This has been emphasised by Nsawam-Adoagyiri Member of Parliament (MP) Frank Annoh Dompreh who is also the Majority Chief Whip.

According to him, last year’s incident that happened amid debate on the Electronic Transaction Levy (E-Levy) was a disgrace to the country and must not repeat itself.

“It is very regrettable, all of us are not happy about what happened. I think upon a sober reflection it is not just about we casting aspersions or disgracing the rich institution of Parliament but it also takes something away from the image, the corporate Ghana vis-à-vis the fact that Ghana is seen as the shining beacon of democracy beyond the frontiers of Africa so is very worrying, to that extent I do not expect that we will have these physicality and exchanges again,” the MP said on the floor of parliament.

He continued, “That notwithstanding we will also have to do what we have to do. I am expectant and praying that we will be able to reach out and be able to do what we have to do a. To be fair to our colleagues on the other side, if you will recall, I think apart from the Speakership that we in the Majority lost out, largely all government policies and what government was seeking to pass, our brothers have cooperated.”

Parliament resumed sitting on Tuesday, January 25, 2022, after it had gone on recess last December to give Parliamentarians the chance to enjoy the Christmas Holidays with family and loved ones.

In the New Year, all MPs from both the Majority and Minority side agree that more consultations on issues is the best way to go.

Fist-fights are therefore not expected in Parliament anymore although the issue of the controversial Electronic Transaction Levy has not been resolved.

The matter according to sources will be on the agenda of the house next week.