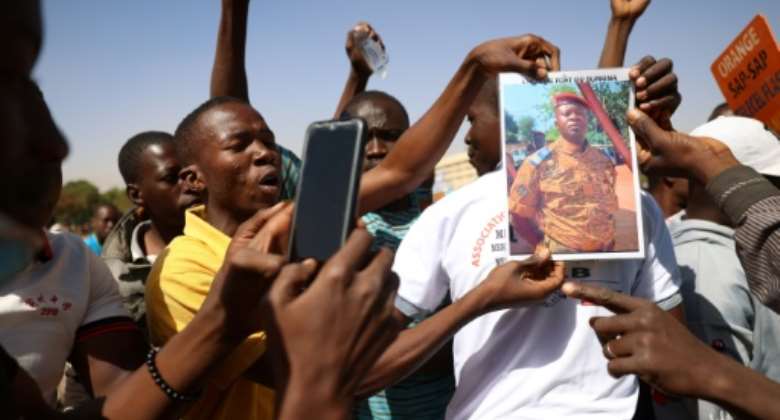 Several hundred demonstrators gathered in Ouagadougou on Tuesday to show support for the junta and its leader, Lieutenant-Colonel Paul-Henri Sandaogo Damiba. By Olympia DE MAISMONT AFP

Burkina Faso's ousted president, Roch Marc Christian Kabore, "is physically well" and is being held by the army in a villa, a source in his party said on Wednesday.

The West African bloc ECOWAS has lashed out at the "military coup" -- the third in one of its 15 nations in less than 18 months -- and said it will meet virtually for an extraordinary summit at 1000 GMT on Friday to consider possible sanctions.

Kabore's state and whereabouts have been a key issue since he was overthrown by mutineering soldiers on Monday, with the United Nations leading calls for his release.

"President Kabore is physically well, but I cannot say anything about his state of mind," said a source in Kabore's People's Movement for Progress (MPP) party.

Kabore "is still in the hands of the army, not in a military camp, but in a presidential villa under house arrest", the source said.

"He has a doctor available... (and) access to his mobile phone, but under surveillance, obviously."

Kabore, 64, was elected in 2015 following a popular revolt that forced out strongman Blaise Compaore, who came to power in a putsch in 1987.

He was re-elected in 2020, but the following year faced a wave of anger over a jihadist insurgency that has ravaged the impoverished West African country.

On Sunday, mutinies broke out in several army barracks a day after police broke up banned protests, and on Monday the rebels moved against Kabore.

Ex-ministers not to leave

The former French colony is now in the hands of the junta Patriotic Movement for Preservation and Restoration MPSR. By - Radio Tlvision du Burkina RTBAFPFile

The former French colony is now in the hands of the Patriotic Movement for Preservation and Restoration (MPSR) -- the name of a junta led by Lieutenant-Colonel Paul-Henri Sandaogo Damiba, a regional commander in the jihadist-torn east.

It has announced the suspension of the constitution and dissolution of the government and parliament.

The junta also closed land and air borders. The air borders were reopened on Tuesday, along with an easing of restrictions on some products moving across land borders.

Damiba met ministers of the ousted government on Wednesday, telling them not to leave the country unless given permission, political sources told AFP.

He also told them he wanted all national components involved in managing the transition, the sources said.

MPP vice-president Clement Sawadogo said that Prime Minister Lassina Zerbo, who was appointed by Kabore in December, has also been detained.

Sawadogo also told AFP that Kabore wrote a resignation letter after the coup "to preserve peace, to avoid a bloodbath that we do not need with what we are already suffering," referring to jihadist violence.

The MPP source also gave details about some of the key events on Monday.

As the revolt widened, Kabore was smuggled out of his residence by his bodyguards in an unmarked car and taken to a safe location, the source said.

"It was later, as pressure from the mutineers rose, that his guards, who were mainly gendarmes, had to leave him in the hands (of the putschists) and join them," the source said.

"The gendarmerie had no other choice but to join (the putschists) because the whole army was in favour of stripping the president of office."

One of the world's poorest countries, Burkina Faso has enjoyed little stability since gaining independence from France in 1960.

The latest coup has caused jitters in West Africa, where in less than a year and a half two other countries -- Mali and Guinea -- have been overtaken by the military.

Earlier this month, ECOWAS ramped up sanctions against Mali after the country's military said it would be unable to fulfil a pledge of staging elections by the end of February.

Criticism of the latest coup has come from the European Union and the African Union, as well as the United Nations.

EU foreign policy chief Josep Borrell said Wednesday that "if constitutional order is not restored" in Burkina Faso, there would be "immediate consequences for our partnership with the country".

"Democratic societies are a value that must be preserved. Military coups are unacceptable," UN Secretary General Antonio Guterres said on Tuesday.

"The role of the military must be to defend their countries and their peoples, not to attack their governments and to fight for power."