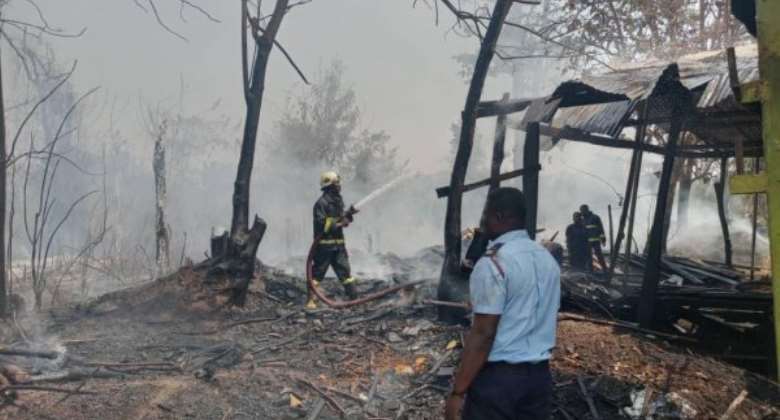 Fire has gutted a forest reserve around the University of Energy and Natural Resources (UENR) at Fiapre, near Sunyani.

The fire has caused extensive damage to property and shops within the enclave.

The timely intervention of the personnel of the Ghana National Fire Service (GNFS) however prevented the inferno from spreading through a gas filling station in the enclave.

It however razed to the ground, a sawmill, a meat and carpentry shop with no casualty recorded.

Though the cause of the outbreak remained unknown for now, residents said they believed it might have been caused by activities of drug peddlers and smokers hiding in the reserve.

The Divisional Officer Grade Three (DOIII) Ruth Tandoh, the Bono Regional Public Relations Officer of the GNFS told newsmen the incident happened around 1000 hours, and advised shop owners around the enclave to weed and keep their surroundings clean.

Mr Alfred Atta Yeboah, the Bono Regional Operations Officer of the National Disaster Management Organisation said his outfit was yet to assess the impact of the outbreak, and assured the victims would be supported.