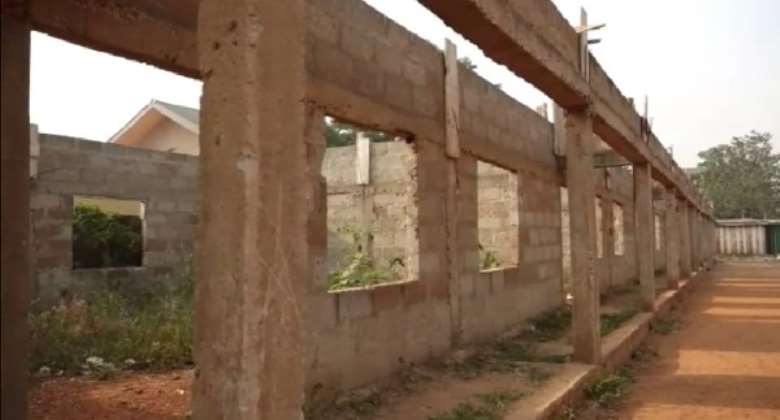 Management of Kromoase D/A Basic School in the Atwima Kwanwoma District of the Ashanti Region has appealed to the government to complete a six-unit classroom block that has been abandoned for so many years.

The residents have accused the Ashanti Regional NPP Chairman Mr Bernard Antwi Bosiako aka Chairman Wontumi who is the contractor of abandoning the project.

The chief and the residents have chastised chairman Wontumi for packing all his equipment away from the site.

The purpose of the construction of the school block was to address the infrastructural deficit in the school.

A visit to the school showed that pupils now study under an opened canopy shed.

The school has no fence wall and toilet facility as school children resort to the bush to ease themselves.

According to some residents who spoke to this reporter, several appeals have been made to the Atwima Kwanwoma District Assembly but have not yielded any result.

The residents on condition of anonymity lamented that the situation is affecting the academic performance of the pupils.

They are appealing to government and other Non-Governmental Organizations (NGOs) as a matter of urgency to come to their aid.

The chief of the area, Nana Opoku Karikari Okogyedom II lamented over the delay of the project.

He appealed to authorities in the Region to see to the completion of the school block to ease congestion and motivate the pupils to attend school.