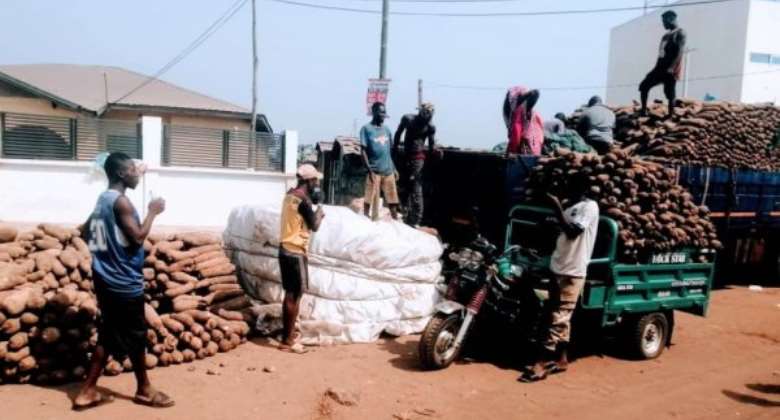 Yam business in the Ashaiman Municipality faces imminent collapse due to poor storage facilities resulting in the rotting of large quantity of the commodity, traders told the Ghana News Agency in an interview at Ashaiman.

The Ashaiman Yam Sellers told the GNA that yam needed special preservation to keep it fresh and for it to last longer, unfortunately, the market lacked such facilities as they resort unconventional means of storage which affected the foodstuff.

They called on the Ashaiman Municipal Assembly to build a modern yam market with facilities for the storage of yam and other foodstuffs.

The traders noted that foodstuffs were perishable and needed to be stored under certain conditions to maintain their original quality.

Madam Habiba Sherifa, who has been in the yam selling business for over 10 years at the Ashaiman market told the GNA the current trend of events in the yam market could spell doom for people involved in the business.

She hinted that traders were confronted with various challenges which needed attention and urged the Municipal Assembly to upgrade the deployable yam sales points into decent markets.

Mr Amadu Moro also told the GNA that yam farmers in the hinterlands did not get government incentives as other farmers in the country said yam farming was capital intensive and the farmers also needed some support from the government to ensure they produced enough yam for public consumption.

“Cocoa, maize, and other farmers get subsidized fertilizers and other chemicals from the government, but yam farmers are always left out,” he expressed concern.

Mr. Moro stressed that the yam value chain employed many people from the farmer through the transportation sector, traders, food vendors, and the final consumer, “it is a major employment opportunity and must be given attention”.

He called on the government to include the yam farmers in the planting for food and jobs programme and also give them some soft loans and other incentives to keep a lot of people in the business to reduce the rate of unemployment in the country.

Hottest Photo Reports
Catch up with all the political quotes from our politicians.
Advertise here
More Commodity News
ModernGhana Links
Current fuel reserves can last for four weeks—NPA allays fears
Petrol, diesel prices to remain stable in April —IES
Government restricts export of soyabeans and maize from Ghana to ensure food security
Takoradi: Prices of foodstuff and other consumables shoot up
Oil soars past $100 after Russia orders troops into Ukraine
Prices of food items shoot up in Sunyani
Household incomes reducing at record levels post-COVID; cost of items go up – GSS report
Fuel prices go up by 10pesewas since beginning of 2022
Fuel prices to go up this week by 18pesewas — IES predicts
TOP STORIES

Akufo-Addo cuts sod for $90million University of Engineering...
12 minutes ago