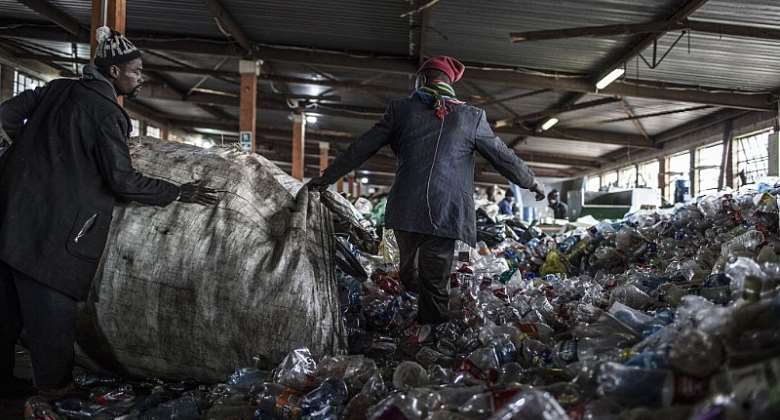 Its unrealistic to expect that people can make enough money from collecting bottles to start their own business. - Source: Gulshan Khan via Getty Images

There are an estimated 60,000 informal waste pickers , also known as reclaimers, in South Africa. They sift through mixed household waste, either from landfill sites or from bins on the streets, to extract recyclable material.

In some other countries consumers are asked to divide recyclable and non-recyclable plastic packaging at home, known as “separation-at-source”. In South Africa there's no country-wide separation-at-source collection from people's homes. This means that recycling relies heavily on the work of informal waste pickers. They're unpaid but generate an income from selling what they collect.

The level of income depends on industry demand and the type of plastic. Beverage bottles made from polyethylene terephthalate (PET) are particularly suited to being recycled. But demand fluctuates according to the price of oil, which is required for plastic production. This needs to be taken into account to ensure collectors' income is fair.

The Valuing Plastic Project was a research partnership with the Anglican Church of Southern Africa's Environmental Network. The aim was to provide a separation-at-source recycling facility in Crossroads, a residential area with a mixture of formal and informal high density housing, in Cape Town. The project provided a shipping container, which was placed outside Eluvukweni Anglican Church, to store plastic bottles collected by the congregation and dropped off each week.

Our study aimed to identify the conditions under which the scheme could grow or be replicated at other churches across Southern Africa. This is important for developing small scale enterprises and is useful for the government to know when setting job creation targets in the waste minimisation sector.

We found that it's unrealistic to expect that people can make enough money from collecting bottles to start their own business. This unrealistic view gives the impression that people who are unemployed can create a job for themselves and lets polluters off the hook.

When the scheme started in January 2020, plastic bottles were selling for R2 (US$0.06) per kilogram on the condition that bottles were clean, dry, divided by colour and had their tops removed. We also collected higher value recyclables (aluminium cans, glass and paper) to try to maximise revenue.

In the first six weeks of the scheme, the work of sorting and storing took 28 hours in teams of up to five volunteers. In February 2020, the sale of 144 kilograms of recyclables generated an income of R290 (US$18). If this were used to pay volunteers it would amount to R10 (US$0.64) an hour. If income were used to pay off the cost of the shipping container, it would take 13 years – or 23 years if we collected plastic bottles only. Volunteers from Eluvukweni Anglican Church in Crossroads in Cape Town, sorting plastic bottles collected by the congregation. Teresa Sandra Perez

A second batch of recyclables was sold in September 2020. The church received roughly the same amount of money for twice the volume of plastic bottles because the value of plastic almost halved during the COVID-19 pandemic. Church leadership decided to discontinue the project and the research concluded that separation-at-source schemes at other churches were not viable. Ultimately, recycling plastic beverage bottles generated plenty of work but little income.

Yet organisations representing plastic producers continue to publicise plastic recycling as an income opportunity . This underplays the unpredictable nature of the recycling industry and enormous volumes required to generate anything more than subsistence levels of income.

There are between 11 (5 litre) and 45 (0.5 litre) plastic bottles in a kilogram, meaning that at R2 a kilogram when there is demand for recycled plastic, a person would need to collect up to around 300 bottles to buy a loaf of bread costing R14 (US$0.90).

The image of plastic recycling as the solution to plastic pollution is perpetuated by statistics that highlight successes , which are communicated in tonnes and percentages that are difficult to visualise. Although plastic producers pay a voluntary levy on virgin plastic, similar to a tax, this money doesn't go directly to collectors or pay for separation-at-source schemes.

It would be fairer if recycled plastic were subsidised by plastic producers so that collectors' earnings did not fall below the national minimum wage of R21.69 (US$1.40) per hour. Producers would pay a compulsory tax on plastic that didn't contain at least 30% recycled content, a system which is about to be introduced in the UK . It would give businesses an incentive to use recycled plastic and create a more steady demand for collectors.

The current situation in South Africa means responsibility for ensuring plastic bottles are recycled lies with consumers and volunteers. When plastic is seen as waste, managing it is paid for by taxpayers.

These ways of thinking protect producers from taking on more responsibility because they aren't regarded as polluters, despite the problems caused when plastic packaging leaks into the environment. In informal settlements plastic bottles lie on the streets and block drains, causing flooding.

Unlike other countries, there are no bans on plastic packaging in South Africa. The 2020 regulations extend producers' responsibility for their product to the post-consumer stage of a product's lifecycle. But implementation is dictated by organisations representing producers . In practice, government continues to assume that the plastic industry can regulate itself.

Plastic pollution campaigners will have their eye on the United Nations Environmental Assembly from 28 February to 2 March 2022 to see if South Africa changes its position , in response to ministerial calls from other countries and environmental groups to sign a new global plastics treaty. An endorsement commits South Africa to an international legally binding agreement on plastic pollution. If South Africa doesn't sign the treaty, it will be a win for oil companies who are stimulating the growth of plastic production in the battle between economic growth and environmental conservation.

Dr Rachel Mash, the environmental coordinator of the Anglican Church of Southern Africa, also contributed to this article.