By Frowin Becker - The Conversation
Article 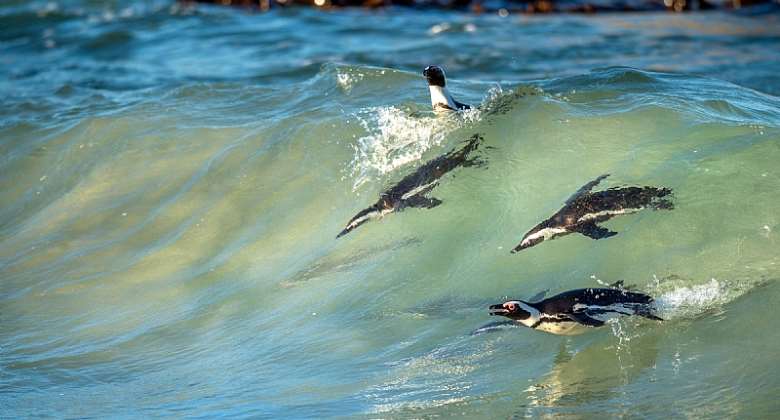 African Penguins are among the species affected by noises made by seismic underwater exploration. - Source: Sergey UryadnikovShutterstock

Sound plays an important role in nature. It also helps researchers to study and interpret different landscapes and the species that live there. Most animals make sound; biologists often rely on chirps, squawks or whistles to describe and identify species or groups of species. They can also extract behavioural information from sound. For instance, researchers have found that the yellow-casqued hornbill in West Africa can distinguish predator-specific alarm calls made by Diana monkeys.

Vocalisations can also simply indicate a species' presence. A recording process called passive acoustic monitoring recently revealed the presence of the cusk-eel , an elusive fish species, in a marine protected area in the Adriatic Sea.

The study of biological sound produced, transmitted or perceived by animals, both on land and in water, is called bioacoustics . The discipline can be traced back to the 1920s; it was formalised with the establishment of the International Committee for Bioacoustics in 1956 .

Read more: Experience the spectacular sounds of a Murrumbidgee wetland erupting with life as water returns

There are several advantages to sound as a study mechanism. Automated recording processes bolstered by technology allow scientists to record at remote sites or for extended periods of time. These processes also eliminate the effect that a human's presence might have on their surroundings. And as technology has improved, recording devices have become more affordable for researchers and citizen scientists alike.

My co-authors and I set out to assess the state of bioacoustics research on the African continent. Our aim was to create a roadmap to help guide future work within the discipline on the continent. We analysed 727 publications – relatively broad, given that nothing of this scale had previously been done – dating from 1953 to mid-2020.

We found that most of the research related to land rather than marine or freshwater animals. We also found that eastern and southern Africa dominated the output for this discipline – but that a majority of researchers came from outside the continent. African-affiliated researchers have started closing that gap in the past 20 years.

There is plenty of work to do to ensure that other species, geographical areas and ecosystems across Africa are better understood through bioacoustics.

We accessed three major online databases and searched for scientific literature with varying keyword combinations. Publications that met our criteria were extracted and scanned for a range of information. This related largely to authorship, study site and study subject. Chronologically, the first piece of research we identified dates back to 1953. In it, birdsong was used to describe spectacled weaver behaviour in South Africa.

Our record suggests that bioacoustics related research output has grown over time and especially since the turn of the millennium – in correlation with advances in technology and data storage. Nearly two-thirds of the studies we evaluated focused on mammals.

We detected biases within the mammalian class. Primate, and more specifically chimpanzee related research, has enjoyed a disproportionate amount of bioacoustics related attention. As a group, bats have also aroused considerable scientific curiosity; their echolocation behaviours are reliable species classifiers .

A penchant for mammal-based research among biologists and ecologists isn't news . But we are flagging it because it raises concerns that conservation efforts are heavily skewed towards some species. This leaves other species at risk.

Our findings also suggest that more bioacoustics attention needs to be directed towards non-terrestrial habitats. Land-based studies made up close to 90% of our entire record. This ought to be addressed, given what human activity has done to the world's oceans and freshwater systems.

A 2021 review published in the journal Science outlined the acoustic challenges our oceans face today. Along the South African coastline, for example, African penguins have been found to evade noises produced by the seismic exploration of gas and oil in the ocean. This has taken on even more relevance with oil giant Shell's recent attempts to conduct exploratory activities near the country's Wild Coast.

But it's not just about assessing immediate threats. Acoustic monitoring can help supply high-quality data to regional or global biodiversity databases, which are designed to inform environmental management and policy.

We suggest that the comparatively slower uptake of underwater bioacoustics research on the African continent could be put down to the lack of affordable equipment and costs associated with deploying it. Equipment affordability issues are, at least, gradually being remedied through the development of more cost-effective technology .

On land, African bioacoustics research has been concentrated in certain regions. East and Southern Africa have, to now, hosted a disproportionately large amount of bioacoustics themed research compared to the rest of the continent. North Africa was strikingly underrepresented in our study.

On a more localised scale, protected areas and their relative ease of access for researchers have been key drivers of regional bioacoustic research efforts in Côte d'Ivoire's Taϊ National Park and Uganda's Budongo Central Forest Reserve , for instance. These territories are well known for their primate populations, especially chimpanzees.

This research is meant to do more than just highlight gaps in the continent's bioacoustics related output. Arguably more importantly, it was designed to aid, encourage and promote African capacity building and participation in an emerging field. This is in line with the work being undertaken by the African Bioacoustics Community . The forum was established in 2018 to connect people working on bioacoustics on the African continent and is preparing to host its third ever conference this year.

Acoustic monitoring has been touted as a “ key monitoring solution ” in the pursuit of answers to biodiversity questions. For Africa this spells boundless potential.