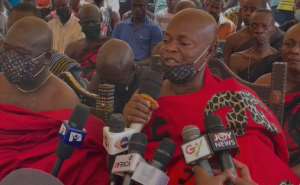 The Chief of Bepo Traditional Area, Nana Attah Kojo Bremibi, has challenged the Ghana Police Service to provide evidence the truck that transported explosives to the Chirano Gold Mines had a police escort.

The Chief under whose jurisdiction the explosion at Appiate occurred, said all information available to him shows that the truck had no police escort.

He was speaking during a working visit by the Minister of Lands and Natural Resources, Samuel Abdulai Jinapor, as well as Works and Housing Minister, Francis Asenso-Boakye.

“What I want to tell the Minister is that the tanker that was carrying the explosives had no police escort. People in Appiatse were around when the tanker was entering the town. When the accident happened, it was in the full glare of the people so if anyone should say there was a police escort, that will be false. If indeed there was a police escort, the question will be where was the police at the time. If anybody wants to challenge this, we would want the individual to come before us to do so.”

The Chief's claim contradicts the Director-General of the Police Public Affairs Department, ACP Kwesi Ofori's claim that the Tarkwa Divisional Police duly signed and approved a police escort for the truck.

Meanwhile, the Government has assured the chiefs and residents of Appiate that processes have begun to rebuild the town.

According to the Lands and Natural Resources Minister, Samuel Abdulai Jinapor, who is on a working visit to the area, the findings of the committee investigating the explosion will soon be released.

He said the reconstruction of the town and the provision of relief items to residents remains a priority.

“As you can see, we have had fruitful engagements with the community members. I must report quickly that the State Housing Company has done some work already, including a sampling of inventory of the structures we are dealing with. President Nana Addo had said government will take the necessary steps to reconstruct the Appiate community.”

The Minister for Works and Housing, Francis Asenso-Boakye also indicated that officials of the spatial planning of his ministry will immediately start with the layout plan for the redevelopment of the community.

“As Minister of Works and Housing, it is our responsibility to follow up and take the necessary action. I have had the opportunity to monitor what is going on in the news, and it is important that I follow up to have a first-hand understanding of what is happening.”

At least 13 people have been confirmed dead as a result of the explosion.

Over 170 families were directly affected by the incident.