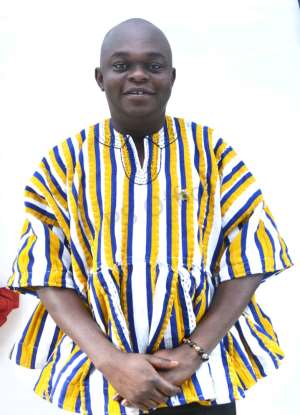 The Ghana Journalists Association (GJA) will, on Monday January 31, 2022, confer an Honorary Membership on the District Chief Executive of Dormaa East, Emmanuel Kofi Agyeman, at Wamfie in the Bono region.

This is in recognition of Mr. Agyeman’s contributions in the promotion of media freedom and also being “a veritable friend of journalists in the Bono, Bono East and Ahafo regions over the years.

Roland Affail Monney, President of the GJA will lead a high-powered delegation of the Association, including the Bono Regional Chairman, Larry Paa Kwesi Moses, to Wamfie, capital of the Dormaa East district to confer the Honorary GJA Membership on the highly respected DCE.

Brief background
Education
Born on 25th May 1978, Mr. Emmanuel Kofi Agyeman began his education at the Mewefiriwuo D/A primary where he ended in Class 3 and continued at the Roman Catholic Primary at Kyeremasu from class 4 to class 6.

He was chosen as the school prefect when he was in Class Six. After successfully completing his Junior Secondary School (JSS as it was then referred to), he progressed to the Berekum Senior High School (BESS) from 1997 to 2000 where he successfully passed his Senior Secondary School Certificate Examination (SSSCE) organised by the West African Examinations Council (WAEC).

Mr. Agyeman then pursued a degree in Physics at the University of Education, Winneba from 2002 to 2005 and became a physics tutor at the Notre Dame Girls Senior High School at Fiapre near Sunyani upon completion.

From 2018 to 2019, he gained admission to the Kwame Nkrumah University of Science and Technology to pursue his Masters degree in Industrial Mathematics. He also holds another Master’s degree in Theology.

Community service
From 2011-2015, he was the Assembly member for the Kyeremasu-Ahenboboano Electoral Area.

Mr. Agyeman is always remembered for his footprints in raising the fallen standards of education in his Electoral Area during his era as the Assembly member for the area as he mobilized some of his colleague teachers to map-out strategies to improve on the situation.

This yielded great results and for the first time, the town of Kyeremasu recorded a 65% pass rate in the Basic Education Certificate Examination (BECE) as against their 15% score in the previous ranking.

Party Politics
Mr. Kofi Agyeman became the Dormaa East Constituency Chairman of the New Patriotic Party from 2013 to 2017 when President Akufo-Addo appointed him as the DCE for Dormaa East, a position he still occupies.

Kofi, as he is affectionately called, has contributed his quota in terms of party communication and continues to be a very good friend of the media.

He is said to have chosen not to continue his education after Secondary School due to the money he thought he was making out of his photography business. He however heeded to an advice by an elderly person one day and later abandoned his business in exchange of academic laurels.