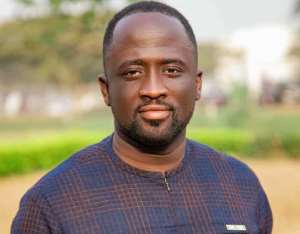 An activist of the opposition National Democratic Congress (NDC), Julian Yaw M. Cobbinah, has called on the youth of Ghana to rally their collective energies behind NDC to kick out the failed Akufo-Addo and NPP government come 2024.

This he said was the only way the young people of this country can see their increasing frustration and lost of faith come to an end.

In response to calls from the youth of the NDC for him to consider running for the position of Deputy National Youth Organizer position of the party, he said the NDC must be desperate in putting young people at the centre.

"The argument is that we need to change this country. I have heard and listened to soo many painful stories of young people who are desperate and want our country to work. I have listened to young people's growing hopes that the NDC should carry the coalition of young people behind it into 2024 without fail.

"As a person continues in the trenches with young people knowing how they are increasingly losing faith in our great nation, how opportunities are being shut in their faces and the depression they have to keep at, I know we cannot gamble with the future of young people.

"We should be desperate to retire the Presidency of H.E Akufo-Addo and build a selfless NDC government based purely on the values that young people in Bogoso have demonstrated a couple of days ago - to draw out our very life to save the country and to save this generation of youth from inheriting a tasteless, mean, insensitive and bleak Republic that is all the worst except the fine language and insatiable greed of people entrapped by political power.

"Your calls have been overwhelming and the language is clear. I have listened to You and You have to listen to me too," he stated.

The youth activist said he will in the coming days firm his decision to either contest or otherwise for the position of the National Youth Organizer of the party in response to the many calls from party youth.

He encourages the youth of the party to keep hopes alive and remain united towards the social change agenda.

"One thing is clear; whether at the final whistle, I decide to run for the Deputy National Youth Organizer of the NDC or NOT, it is you the young people's agenda for social change on the wings of a renewed NDC that will count in the decision making process.

"For all the many calls, endorsements and words of support I have received from young people in the NPP, NDC, CPP, independents and etc who believe I can lead them into an NDC 2024 victory I say thank you," the Akwatia/Elmina/Dzevetato boy stated.

He stresses the need to fight collectively to bring the depressed youth into the palace of a "metaphoric fruitful nation that works for all."

Akufo-Addo cuts sod for $90million University of Engineering...
13 minutes ago