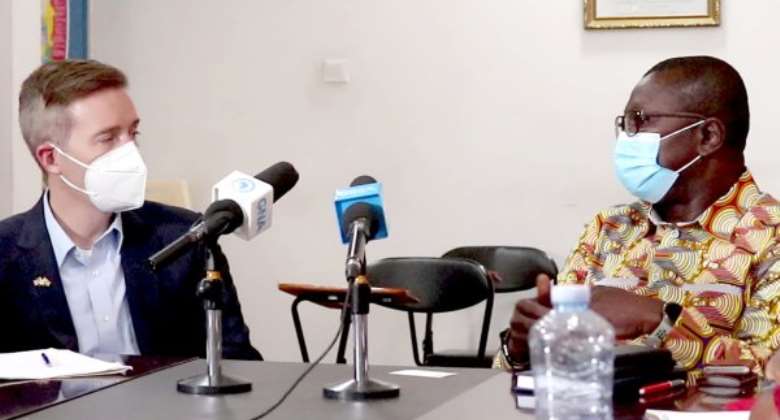 The United States Embassy in Accra will continue to invest in building the capacity of journalists to deliver quality information that will build an inclusive and progressive society.

Mr Kevin J. Mr Brosnahan, the Press Attaché at the US Embassy, Ghana, stated this when he paid a working visit to the Ghana News Agency on Tuesday.

The visit, during which he held discussions with the General Manager and the leadership of the Editorial Department, was to familiarise himself with the operations of the state wire service and strengthen the bond between the Embassy and GNA.

In promoting the independence of the media, Mr Brosnahan said it was important to invest in professionalism, development communication, investigative, and human rights reporting.

Media practitioners should also be enabled to promote dialogue on public policy for citizens to engage on “policies rather than politics.”

The media, he said, should also play an effective role in helping communities to build resilience against conflict and explore conflict resolution mechanisms at the local level.

Mr Brosnahan said the Embassy would soon organise a training programme on HIV and AIDS in the Western North Region for journalists towards ending stigmatisation.

He lauded the cooperation the GNA team across the country had extended to the Embassy in the execution of its activities over the years.

He commended the GNA for championing professionalism and expressed the Embassy's support towards enhancing the capacity of the journalists to deliver on their mandate.

Mr Albert Kofi Owusu, the General Manager, said the Agency continued to help many media houses to find their feet and journalists to cut their teeth though it had had to contend with logistical and human resource challenges.

The commitment to professionalism and impact journalism had made the Agency a reference point for credible information.

“Editorially, we are independent and our role in building a modern progressive democratic society can never be outdated.

“All we need is investment in equipment and more training to meet changing needs of our society,” he said.

The Agency is in the process of securing resources to deliver specialised reports in business, finance and other critical areas of the economy.