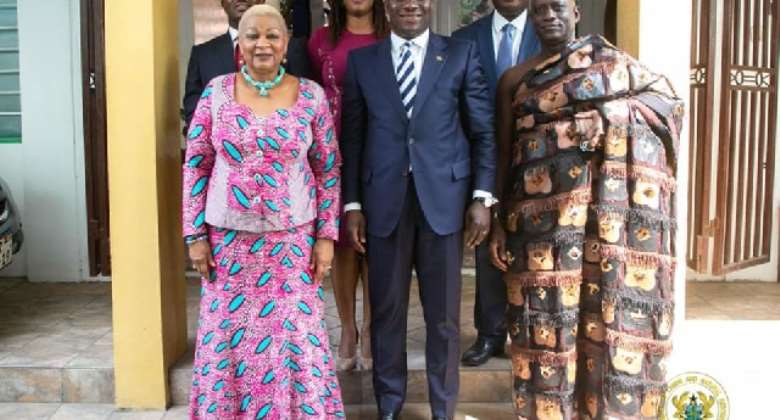 The Ministry of Lands and Natural Resources, has launched an Appiatse Support Fund, to raise funds to support the people of Appiatse in the Prestea Huni-Valley District of the Western Region, who were affected by an explosion that occurred in the community on Thursday January 20, 2022.

According to reports, a truck carrying explosives from Maxam Ghana Limited, and intended for Chirano Gold Mines, was involved in an incident that caused the explosives to explode.

The incident is said to have occurred when the truck carrying the explosives collided with a tricycle. About 13 people are reported to have died from the explosion with scores of people injured.

The explosion also caused severe damage to buildings in the community, virtually razing the community to the ground.

The injured are being treated in nearby hospitals with those with severe injuries transferred to the Komfo Anokye Teaching Hospital. Government has already announced that it will pay in full the medical bills of all the injured. The launch of the Apiate Support Fund, is one of the measures Government has adopted to support the victims of the unfortunate incident.

Launching the Fund on Tuesday 25th January, 2022, the Minister for Lands and Natural Resources and Member of Parliament for Damongo Constituency, Samuel A. Jinapor, MP, said the launch of the Fund is on the instructions of the President of Republic, and is purposely to raise funds to among others, support the victims of the incident and reconstruct the community which was brought down by the explosion.

He said to ensure fair, transparent and judicious use of the Fund, Government has appointed a five-member independent committee, to manage the Fund.

The Committee will be chaired by Rev. Dr. Joyce Aryee, a former Minister of State under Jerry John Rawlings and former Chief Executive Officer of the Ghana Chamber of Mines and a Companion of the Order of the Volta.

The other members of the Committee are Tetrete Okuamoah Sakyi II, Omanhene of Wassa Amenfi Traditional Area, Mr. Philip Owiredu, the Managing Director of Cal Bank, Dr. Antoinette Tsiboe-Darko, a Senior Lecturer at the University of Ghana and Research Fellow at the Centre for Social Policy Studies, and the Chief Executive Officer of the Ghana Chamber of Mines, Mr. Sulemanu Koney.

According to the Minister, the terms of reference of the Committee are “to raise sufficient funds for the Appiatse Support Fund, and to supervise the disbursement of the Fund, in accordance with the highest standards of integrity and transparency, for the benefit of the people of Appiatse.”

The Minister expressed his confidence in the Committee to execute this mandate with fairness and honesty.

He assured the people of Appiatse of Government’s continuous support, and called on the general public to generously contribute to the Fund.

Speaking on behalf of the Committee, the Chairperson, Dr. Joyce Aryee, thanked the President of the Republic, for the confidence reposed in them to manage such an important fund.

She said though the task in onerous, they trust in the providence of God to guide them in executing this mandate.

She called on all Ghanaians, particularly the media, to support them in carrying out this duty.