By Jan van der Made with RFI
Russia 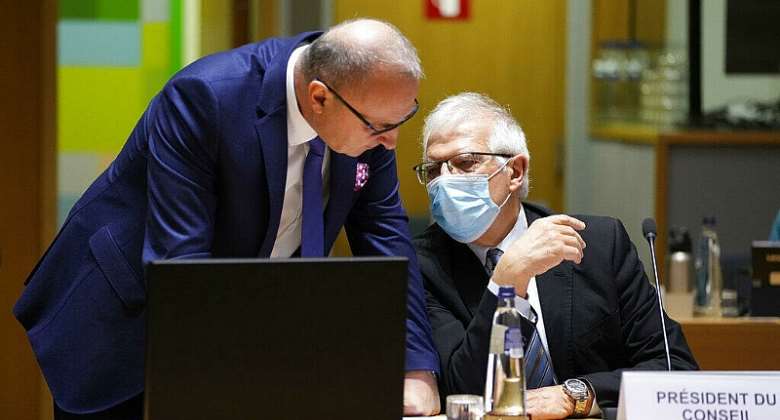 Russian and Ukrainian officials are set to meet in Paris Wednesday for talks with their French and German counterparts in a bid to defuse tensions, an aide to French President Emmanuel Macron said.

The meeting, according to a statement from the "Normandy Format", will be part of a wider effort to avert war.

Within this context, France is proposing "a path to de-escalation" that would include steps by both Ukraine and Russia, the aide told reporters on condition of anonymity.

The Normandy Format talks ( Format Normandie in French) involve four countries - Germany, Russia, Ukraine and France - whose representatives met informally during the 2014 D-Day celebrations in Normandy, France, in an effort to resolve the war in Donbas. It has also been known as the Normandy contact group.

"The president thinks there is a space for diplomacy, a path to de-escalation," the aide said, confirming that Macron would speak to Putin "in the coming days".

The meeting on Wednesday will bring together one of Russia's vice-prime ministers and a senior aide to Ukraine's President Volodymyr Zelensky, as well as diplomatic advisors to Macron and German leader Olaf Scholz, the French aide said.

'Globalization of indifference'
But the meeting according to the "Normandy Format" was strongly criticized in Kyiv.

In a hard-hitting opinion piece in the Kyiv Post, Iuliia Mandel, a former press secretary of Ukraine's President Volodymyr Zelensky, expresses shock about the willingness of France and Germany to take a softer line on Russia.

In the piece, entitled, Against the Globalization of Indifference – Why German and French Attitudes are Immoral and so Damaging, she recalls the shock she had during an earlier visit to Paris when she discovered the lack of knowledge among Macron's advisors on the situation in the Donbas region in Eastern Ukraine where over 14,000 people died.

"Despite 30 years of independence, Ukraine has not managed to establish as close a relationship with France as Moscow has seemingly been able to achieve."

"Not surprisingly," she continues, "Macron called on the European Union to make its own security pact with Russia, breaking US calls for unity and action in the face of a possible Russian invasion of Ukraine."

'Equal player?'
Mandel also attacked Germany's reluctance to fully discontinue the Nord Stream II gas pipeline, which the US says will give Moscow strategic leverage over the EU - and recent remarks by a German admiral who had to resign after saying that Russian President Vladimir Putin "deserves respect".

"The Germans and the French perceive Russia as an equal player," she writes.

"Perhaps they are somehow afraid of, or genuinely respect, Putin, or perhaps they misunderstand Russia, driven by the logic of a peaceful open economy.

"Whichever is true, it seems that Russian brute force is enough to make them count as equals," she adds.

'Hysteria'
Her hard line is shared by the Americans. In spite of the difference in approach with the EU, US President Joe Biden said there was "total unanimity" on how to deal with Russia, as the Pentagon said 8,500 US troops were being put on standby and NATO said it was sending ships and jets to bolster eastern Europe's defences.

Meanwhile, in Moscow, President Vladimir Putin's spokesman Dmitry Peskov said these actions were only adding to an already tense atmosphere.

"The United States is escalating tensions," he told reporters. "We are watching these US actions with great concern," he said, reproaching the US and its allies that their information about a potential conflict with Ukraine was filled with 'hysteria' and 'laced with lies'