Aid trucks stranded outside Tigray amid reports of clashes 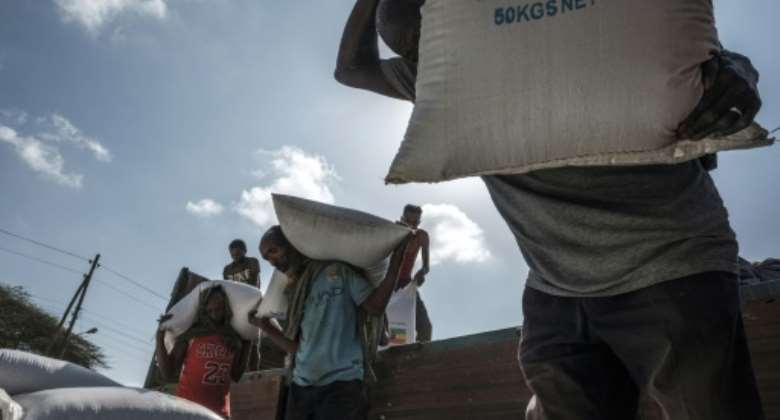 The UN said last week that food distribution in Tigray was at an all-time low. By EDUARDO SOTERAS AFPFile

Trucks bearing badly-needed food aid were stuck at a checkpoint outside Ethiopia's war-hit Tigray region for a second day Tuesday, aid workers said, as the government and rebels blamed each other for stalling the deliveries.

Last week the UN said food distribution was at an all-time low in Tigray, where a 14-month conflict has driven hundreds of thousands of people into what it terms "famine-like conditions".

On Sunday 27 trucks carrying 800 tonnes of food left for the Tigray capital Mekele from the neighbouring Afar region along the only functional land route, according to the World Food Programme.

But the convoy has since Monday been stuck at a checkpoint in the town of Serdo, two humanitarian officials told AFP Tuesday, and it is unclear whether it will proceed.

Government spokesman Legesse Tulu said Monday that rebels from the Tigray People's Liberation Front (TPLF) had "attacked" locations including the town of Abala along the Tigray-Afar border, "cutting off the primary artery of humanitarian aid".

He said tens of thousands of people had been displaced over three days and that there were "no government defence forces in this area".

The TPLF, for its part, blamed pro-government forces for instigating clashes in the area.

The competing claims could not be independently verified.

Fighting broke out in Tigray in November 2020 after Prime Minister Abiy Ahmed sent troops to topple the TPLF, the region's former ruling party, saying the move came in response to TPLF attacks on army camps.

After initially losing control of Tigray's cities and towns, the TPLF regrouped and retook the region in June, then launched offensives into neighbouring Afar and Amhara.

Tigray is a region of about six million people. By Aude GENET AFPFile

Tigray itself, a region of six million people, has been subject to what the UN describes as a de facto blockade for months.

Humanitarian access was a main topic during last week's visit to Addis Ababa of the State Department's highest-ranking diplomat for Africa and its special envoy for the Horn of Africa, diplomats briefed on the talks said.

On Sunday, Ethiopia said it would allow more flights "to augment the land transportation" of food and medicine into Tigray.

AFP documented starvation deaths in Tigray in September, and in November Tigray's pre-war government said nearly 200 children had died of starvation in hospitals across the region.