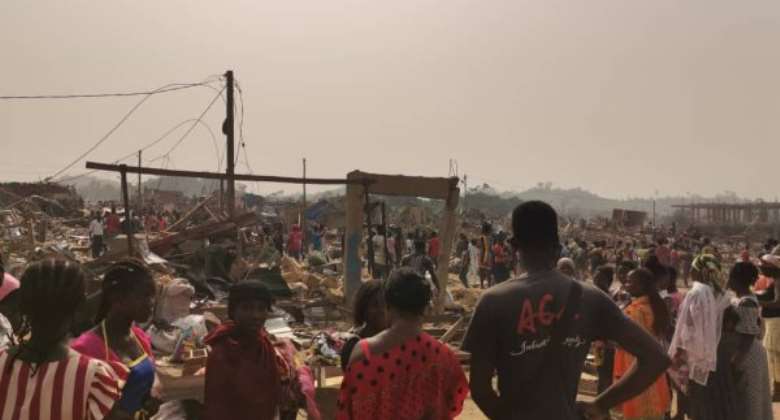 The National Disaster Management Organisation (NADMO) says some non-residents of Appiatse are “posing” themselves as victims of last Thursday's explosion to benefit from relief items.

The Organisation said it had consequently set up a 17-member committee, made up of six survivors who were indigenes of Appiatse to help coordinate the distribution of relief items to the survivors.

“It has come to our attention so we have formed a Committee to help identify those who are not part of the survivors to ensure that items are given to those who deserve it,” Mr Francis Abeiku Yankah, NADMO Coordinator for the Prestea Huni-Valley Municipality, told the Ghana News Agency.

He said the organisation would work closely with the committee to identify the actual residents of Appiatse before essential items were distributed.

“Some of them were pushing us to give them money instead of food. But we identified that some of the supposed survivors were not residents of Appiatse.

“We have decided that we will not give the rice to them in bulk. We will give them the quantity they will need in a day and we will make sure that it is cooked at where we are housing them,” he said.

About 150 survivors are currently being housed at the Saint Michael Catholic Parish Hall at Bogoso in the Prestea Huni-Valley Municipality in the Western Region.

During a visit on Sunday, January 23, 2022, to the church, which is now being used as a temporary relief centre, some of the survivors told the GNA that some individuals from neighbouring communities were “posing as survivors” at the centre.

They claimed that some people who had come to visit their relatives who survived the explosion “queued for food” and all other items that were distributed to the survivors.

“A lot of them are not part of us. Yesterday for instance, when I was sharing food, I identified a number of people in the queue who are from neighbouring communities and not residents of Appiatse,” Madam Faustina Adjetey, a survivor and member of the 17-member committee, said.

She said the committee had commenced an exercise to number all the known residents of Appiatse and separate them from the “impersonators” to ensure sanity in the distribution of relief items.

Madam Adjetey appealed to NADMO to extend the distribution of the relief items to the various hospitals where victims were receiving treatment.

“The food should be extended to them. It appears that it is only those at the centre that are being fed. Those in the hospitals rely on their relatives for food,” she stated.

Fourteen people were killed and 179 others injured in last Thursday's explosion.

Many individuals, organisations, and groups have since gone to the aid of the victims with assorted relief items and cash donations.

The First Lady, Rebecca Akufo-Addo on Monday, January 24, 2022, donated assorted items, including rice, detergents, cloths and scarves to support the upkeep of the victims.

The Government has assured that it would provide temporary houses for the hundreds that have been displaced among other support services.