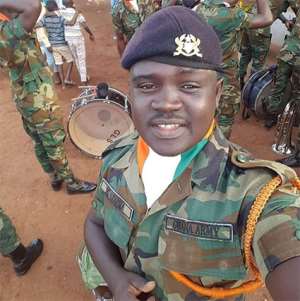 The Ghana Armed Forces (GAF) has distanced itself from the alleged military officer who was arrested with four others at Buipe in the Savannah region for allegedly snatching a 2012 Toyota Camry car in Tamale in theNorthern region.

A search conducted on them found 13 mobile phones, one Falcon Foreign Pistol loaded with 9mm ammunition, a wallet containing a bunch of keys together with two handcuffs keys, two Voter’s ID Cards, Melcom card, Access Bank card, and the sum of GHC21.20p.

The GAF is worried about the rising spate of impersonation by civilians, either wearing military uniforms or posting fake pictures of themselves as military officers to defraud unsuspecting Ghanaians.

The statement further noted that the unauthorized sale of military uniforms and military pattern gadgets by some vendors contributes to this state of affairs and is inimical to national security.

The pistol retrieved from the suspects

Commander Andy La-Anyone indicated that the GAF is ready to cooperate with the Police to unravel the source of the military uniform in the particular incident and to stop the unauthorized sale of military uniforms across the country.

“Ghanaians should be confident to provide information to the security agencies to nip this trend in the bud.”

The Ghana Armed Forces advised the general public to be circumspect in dealing with persons who pose as military personnel.

Prepare for hunger in Ghana — GAWU warn Ghanaians
21 minutes ago