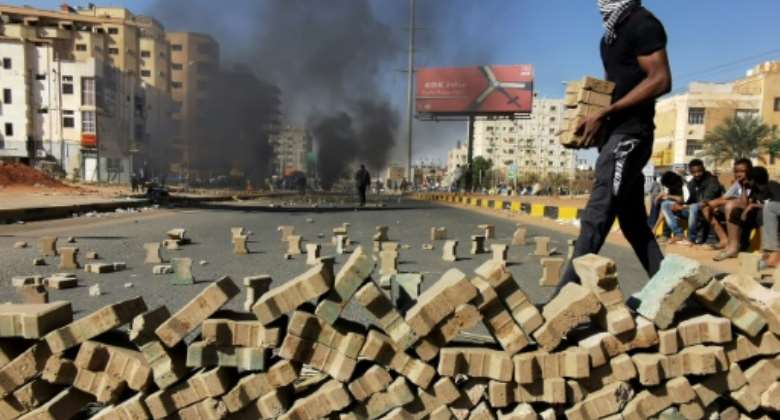 Sudanese protesters block a street in Khartoum in anti-coup protests, seen here on January 20. By - AFP

Sudanese security forces fired tear gas Monday at crowds calling for civilian rule and demanding justice for the scores killed in crackdowns since a military coup nearly three months ago.

Thousands of protesters in the capital Khartoum chanting slogans against the army headed toward the presidential palace, an area which security forces had sealed off ahead of the march.

Police forces later fired tear gas to disperse the protesters, according to an AFP correspondent.

Protests were also held in cities including Wad Madani, south of the capital, the Red Sea city of Port Sudan, and the eastern state of Gedaref, according to witnesses.

Sudan has been rocked by regular protests since the October 25 military power grab led by general Abdel Fattah al-Burhan.

The coup derailed a civilian-military power-sharing deal, that had been painstakingly negotiated after the 2019 ouster of autocrat Omar al-Bashir, stalling a planned for transition to civilian rule.

Anti-coup demonstrations have left at least 73 people killed and hundreds wounded, according to medics.

On Sunday, Sudan's key Umma party vowed "to remove all traces of the coup".

It however warned that the "coup leadership" will "persist with its brutality and come up with new ways to commit violent massacres and launch mass arrests of revolutionaries."

Hundreds of pro-democracy activists have been arrested in the crackdown on anti-coup activists.

On Saturday, a leading women rights activist Amira Othman was arrested following a raid on her home in Khartoum, according to a statement by the "No to Women's Oppression" initiative which she leads.

Other activists from the "resistance committees", informal groups which have been instrumental in organising anti-coup protests, were also arrested late Sunday, according to members who requested anonymity fearing reprisals.

On Friday, Sudanese authorities requested delaying the arrival of UN expert on human rights in Sudan, Adama Dieng, who was appointed in November and had been due to make his first official visit.

Sudanese protesters beat drums and chant slogans in the capital Khartoum, in support of the families of protesters killed since last year's military coup. By - AFP

Perthes earlier this month launched individual talks with various Sudanese factions in a push to resolve the crisis.