Residents of Settlement unhappy over destruction of road in Savannah Region

By Ananpansah B. Abraham
Regional News 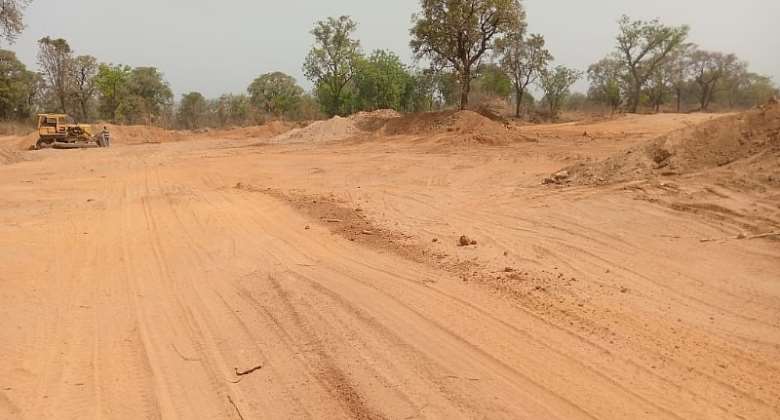 The residents of Settlement, a suburb of Canteen in the West Gonja Municipal of the Savannah Region have expressed deep worry about the destruction of the road network leading to the community.

This they say was having a heavy toll on the community and putting the lives of motorists and pedestrians, especially women, farmers and school children at risk.

At a community durbar to review activities for last year 2021 and set community goals for the year 2022, the Assemblyman, Ananpansah Abraham said the extent of destruction of the road by tipper trucks and dozers used to convey gravel from the gravel pit in the area was disheartening.

He said he was brokenhearted to see the Canteen-to-Settlement road which hitherto was in very good shape and motorable, suddenly turn into a sandy and dusty path due to the gravel digging activities, which was posing economic and health risks to residents.

The situation he said, was likely to worsen during the rainy season if something is not done urgently.

According to him, the community was currently not benefiting anything as a Corporate Social Responsibility from the activities of constructors and individuals who come to excavate gravel from the area, stressing that, "I daresay these people don't even pay revenue to the assembly for road maintenance and were acting in bad faith".

The Assemblyman said the constructors and individuals have failed in their several promises to reshape the road, after several community complaints he laid to them and stakeholders on the need to maintain the very road they were plying with their heavy-duty trucks to harvest gravel from the area.

In the interim, he said there will be a community bye-law barring any individual or group of persons from digging gravel from the area until the road is reshaped.

The community chief, Seidu Iddrisu appealed to government to intervene in reshaping the road wondering why those fetching gravel from the area have turned death ears to the several complaints of the community.

He said the community was unanimous in its decision to place a temporal ban on the fetching of gravel from the area until the road is reshaped, commending the Assemblyman for always responding promptly to the concerns of the community.

Joseph Yidane, the community caretaker expressed fear for the farmers ahead of the rainy season over the sorry state of the road.

He said the health and lives of the residents were at risk if nothing is done about the situation, stressing the numerous times the community together with the Assemblyman have called on stakeholders and the individuals fetching gravel from the area to consider fixing the very road they had destroyed to no avail.

The women and youth present at the meeting added their voice to the need to reshape the road, stating that in the event of an emergency it will be very difficult for an ambulance and other emergency vehicles to ply to the community.

They said they were contemplating a demonstration to register their displeasure over the destruction of the road network which use to be one of the best feeder roads in the municipality if nothing is done about the situation.

Serwaa Broni attack: Give us information to impeach Akufo-Ad...
1 hour ago