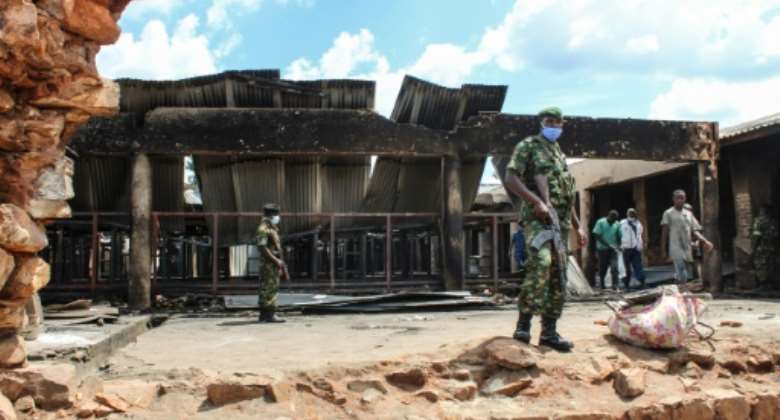 Much of the prison in Burundi's political capital Gitega was destroyed. By - (AFP)

Burundi is yet to conduct a credible and transparent investigation into a prison fire over a month ago that may have killed or injured hundreds of inmates, Human Rights Watch said Monday.

The rights watchdog accused government authorities of failing to conduct a proper inquiry into the December 7 inferno at Gitega Central Prison that officials said claimed 38 lives and injured 69 others.

"More than a month after the tragedy at Gitega prison, the government has failed to give a full and truthful accounting of what happened and to treat family members of the deceased with dignity," Lewis Mudge, central Africa director at HRW, said in a statement.

"The absence of information about the real number and identities of the victims only adds further pain and distress in the wake of unimaginable loss."

HRW said the authorities must examine the cause of the blaze that ripped through the rundown and overcrowded prison and ask why inmates were not evacuated or properly accounted for after the disaster.

"They should communicate findings transparently -- including the names of the dead and the injured -- and fairly prosecute anyone who may be held responsible, if necessary," it said, adding that compensation and other support should be provided to victims' families.

Many prisoners were still asleep when the massive blaze erupted before dawn.

Vice President Prosper Bazombanza, who visited the scene of the tragedy with several ministers, told reporters that 38 people were killed and 69 seriously hurt.

But HRW, which interviewed survivors and others who have visited the prison since the blaze, estimated "several hundred prisoners may have died or been injured" in the inferno.

Much of the nearly century-old facility in Burundi's political capital Gitega was destroyed in the fire, which broke out around 4am and spread to crowded blocks holding hundreds of inmates.

One prisoner told HRW that many in his block survived but elsewhere "they didn't wake up in time and many died".

"The guards came at 6am, but by then it was too late," the inmate said.

Burundi's interior ministry said at the time that the disaster was caused by an electrical short-circuit.

The same explanation was given for another, less serious fire at the prison in August.

The facility, the third largest in Burundi, housed a number of political prisoners in a high-security compound.

In all, it was home to more than 1,500 inmates at the end of November, according to prison authority figures, far higher than its designed capacity of 400.

Chronic overcrowding is a problem in prisons in Burundi, one of the poorest nations in the world, and inmates often complain about their cramped living conditions and lack of food.