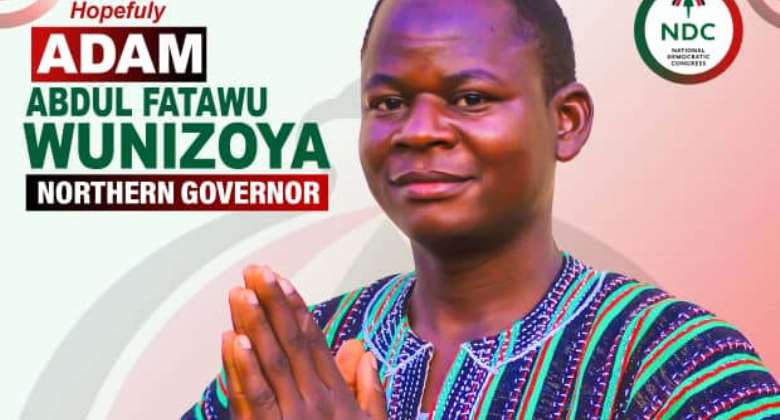 Fliers and postures seen on both social media and Whatsapp, Mr. Abdul- Fatawu Wunizoya known popularly as the 'Northern Governor' officially announced his interest in the Deputy Communication position, and called for support in the contest.

"After assessing my contribution to the party success at the constituency through the regional to the National, I wish to officially announce my intentions to contest the Deputy Constituency Communication position of our great National Democratic Congress(NDC) party for Sagnerigu," he stated.

The Sagnerigu constituency is among the few constituencies often described as "safe seats" for the opposition NDC in the Northern region.

However, Mr. Abdul- Fatawu Wunizoya indicated that party communication in terms of achievement of the party, against that of the weaknesses of the NPP government over the years has been poor.

To salvage the situation therefore, Mr. Abdul-Fatawu Wunizoya said he decided to contest the Deputy Comms Director position of the party in the constituency to assist anyone who will be elected as constituency communication director.

Though the party is yet to give official communication regarding the date for the branch and that of the constituency internal elections, many party supporters have already shown interest in positions at the branch level to the National level.

Few days after his declaration, several people have already thrown their weight behind him, calling on the constituents to support him.

Mr. Adam Abdul-Fatawu Wunizoya (Northern Governor) is a 30-year-old young man from Kpene, a well-known community in the constituency.

Mr. Abdul-Fatawu had his early education at the Kpene L/A primary school, the Nyerizee Presbyterian Primary School and the Bagabaga Primary School, all in the constituency.

He also attended the Seventh Day Adventist (SDA) primary and Junior High School where he had his BECE.

In 2009, he had admission to the Tamale Senior High School (TAMASCO) where he completed and obtained his WASSCE/SSCE in 2013.

In September same year, the 'Northern Governor' as he is passionately called, went to the Divine Media College(DMC) where he obtained a Diploma in Journalism and Public Relations in 2015.

Currently, he is a final year student at the Tamale College of Education (TACE) where is studying a Bachelor's Degree in Education(B. Ed) in English and Ghanaian Language (Dagbani).

Some leadership positions occupied by Mr. Adam Abdul-Fatawu Wunizoya include National Treasurer for the Teacher Trainees Association of Ghana(TTAG), SRC General Secretary for the Tamale College of Education(TACE), Chief Advisor for the Tertiary Education Institution Network of the National Democratic Congress (TEIN) at the Tamale College of Education, President for the Young Democrats, an NDC youth group in the Sagnerigu Constituency.

He is also the current Public Relations Officer (PRO) for the Ambassadors of NDC, a dedicated youth group of NDC in the Northern Region.

Furthermore, he is the Public Relations Officer for the Kpene Youth Club, a youth organization in Kpene, his hometown.

Again, the "Northern Governor" is an executive of the Dagbon Students Association(DASA) at the Tamale College of Education.

He is also the Education Committee Chairman for the Sagnerigu Youth Parliament, a youth-led organization in the Sagnerigu Municipality.