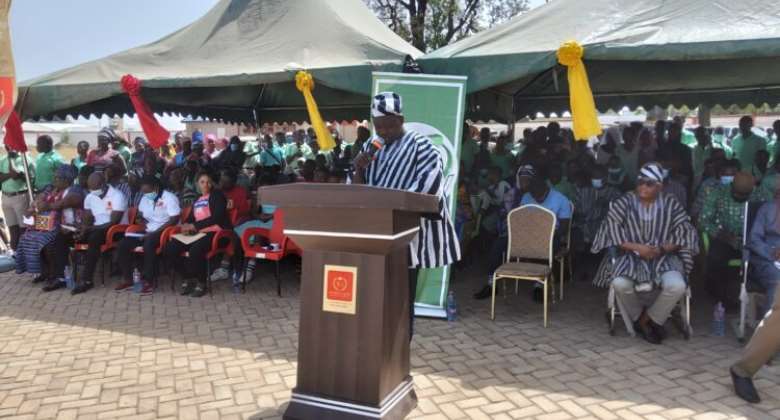 A cultural festival dubbed "Wuripe Savannah Regional Festival (WUSACUF)" which is aimed at reviving the interest of the youth in culture and traditions, has been launched by Kaga Multi Consult in Damongo in the West Gonja Municipality of the Savannah Region.

The initiative which also seeks to promote tourism in the Savannah Region and at the same time expose the potentials of the region to the rest of the world, was officially launched at the forecourt of the Jakpa Palace on Thursday, January 20, 2022.

Speaking at the launch, the Chief Executive Officer for Kaga Multi Consult (KMC), Mr. Abutu Kapori said a research into culture and traditions conducted in the Savannah Region to ascertain whether or not the youth of the region still have interest and preparedness to learn the varied cultures and traditions within the region revealed that about 95% of the youth population between the ages of 18-40 years are currently not showing the needed interest in the culture and tradition of the Savannah Region.

"It is therefore against this background that the Kaga Multi Consult (KMC) team, came up with a concept of cultural festival to reignite the cultural interest in the youth of the Savannah Region", he said.

According to him, the scope of the Wuripe Savannah Regional Festival (WUSACUF) seeks to cover the seven administrative Municipal/District Assemblies of the Savannah Region with over one hundred thousand people anticipated to witness the event and several others expected to catch glimpses of the event via live television telecast on North Television (NTV).

He announced that the festival contest is set to last for nine weeks adding that the winner takes home a brand new car fully sponsored by Wuripe and Sons Royal Lodge, a plague, certificate of participation and several other souvenirs.

The first runner up as announced by the Chief Executive Officer for Kaga Multi Consult, shall be going home with a brand new motorbike, a plague, certificate of participation and a host of others.

Second runner up shall also be going home with a table top freezer, a plague, certificate of participation, sash and a hamper.

Fourth (4th) and fifth (5th) participants shall go home with consolation prizes of 32 inch flat screen TV each, certificate of participation, sash and a hamper.

The winners shall also have a one - week accommodation with Wuripe and Sons Royal Lodge, a two-night accommodation at Zaina Lodge in the Mole National Park of the Savannah region. A trip to Aqua Safari Resort in the Volta Region.